In meteorology, a tropical cyclone (or tropical storm, typhoon, or hurricane, depending on strength and location) is a type of low-pressure system which generally forms in the tropics. While they can be highly destructive, tropical cyclones are an important part of the atmospheric circulation system, which moves heat from the equatorial region toward the higher latitudes.

The ingredients for a tropical cyclone include a pre-existing weather disturbance, warm tropical oceans, moisture, and relatively light winds aloft. If the right conditions persist long enough, they can combine to produce the violent winds, incredible waves, torrential rains and floods associated with this phenomenon.

This use of condensation as a driving force is the primary difference which distinguishes tropical cyclones from other meteorological phenomena. Mid-latitude cyclones for example, draw their energy mostly from pre-existing temperature gradients in the atmosphere. In order to continue to drive its heat engine, a tropical cyclone must remain over warm water, which provides the atmospheric moisture needed. The evaporation of this moisture is driven by the high winds and reduced atmospheric pressure present in the storm, resulting in a sustaining cycle. As a result, when a tropical cyclone passes over land, its strength will diminish.

Tropical cyclones are classified into three main groups: tropical depressions, tropical storms and a third group whose name depends on the region. 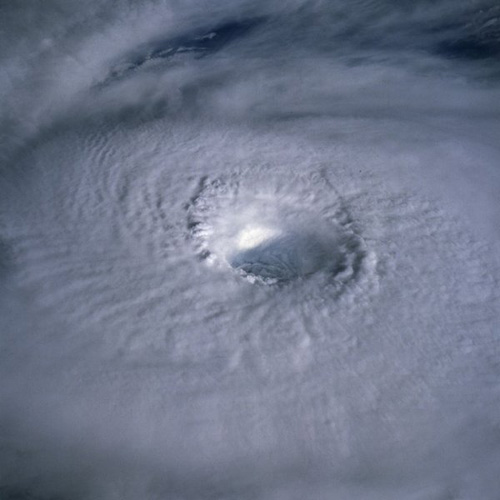 A tropical depression is an organized system of clouds and thunderstorms with a defined surface circulation and maximum sustained winds of less than 17 metres per second (33 knots, 38 mph, or 62 km/h). It has no eye, and does not typically have the spiral shape of more powerful storms. It is already becoming a low-pressure system, however, hence the name "depression".

A tropical storm is an organized system of strong thunderstorms with a defined surface circulation and maximum sustained winds between 17 and 33 meters per second (34-63 knots, 39-73 mph, or 62-117 km/h). At this point, the distinctive cyclonic shape starts to develop, though an eye is usually not present.

The term used to describe tropical cyclones with maximum sustained winds exceeding 33 meters per second (63 knots, 73 mph, or 117 km/h) varies depending on region of origin, as follows:

-typhoon in the Northwest Pacific Ocean west of the dateline

-In other places in the world, hurricanes have been called Bagyo in the Philippines, Chubasco in Mexico, and Taino in Haiti.

This is the intensity at which tropical cyclones tend to develop an eye, which is an area of relative calm surrounded by the eyewall, which contains the strongest winds of the storm. They also carry a distinct spiral shape to them, and spin in a cyclonic fashion depending on the hemisphere; counterclockwise in the Northern Hemisphere, clockwise in the Southern Hemisphere. The strongest of these storms have had maximum sustained windspeeds recorded at over 85 meters per second (165 knot, 190 mph, 305 km/h).

Hurricanes are categorized on a 1-to-5 scale according to the strength of their winds, using the Saffir-Simpson Hurricane Scale. A Category 1 storm has the lowest wind speeds, while a Category 5 hurricane has the strongest. These are relative terms, because lower category storms can sometimes inflict greater damage than higher category storms, depending on where they strike and the particular hazards they bring. In fact, tropical storms can also produce significant damage and loss of life, mainly due to flooding.

The U.S. National Hurricane Center classifies hurricanes of Category 3 or above as Major Hurricanes. The Joint Typhoon Warning Center classifies typhoons with wind speeds of at least 150 mi/h (67 m/s or 241 km/h, equivalent to a strong Category 4 storm) as Super Typhoons.

An extratropical cyclone refers to a storm that derives its energy from horizontal temperature gradients typically found over higher latitudes. A cyclone originating over the tropics can become extratropical as it moves toward higher latitudes if its energy source changes from released heat through condensing water to the difference in temperature between air masses. From space, extratropical storms have a characteristic "comma-shaped" cloud pattern. Extratropical cyclones still can be dangerous because their continuing low pressure causes powerful winds.

In the United Kingdom and Europe, some severe northeast Atlantic cyclonic depressions are referred to as "hurricanes," even though they rarely originate in the tropics. These European windstorms can generate hurricane-force windspeeds but are not given individual names. In British shipping forecasts, winds of force 12 on the Beaufort scale are described as "hurricane force."

There is also a polar counterpart to the tropical cyclone, called an arctic cyclone.

The word typhoon comes from Chinese phrase tái fēng. The English spelling also suggests a connection to Persian Tufân, linked to Greek Typhon. The reversed-syllable form hong-thai in Min Nan (Hoklo) supports the Chinese origin of this term. The word hurricane is derived from the name of a native Caribbean Amerindian storm god, Huracan. The word cyclone came from the Greek word kyklos = "circle," "wheel."

A strong tropical cyclone consists of the following components.

-Warm core: tropical cyclones are characterized and driven by the release of large amounts of latent heat of condensation as moist air is carried upwards and its water vapor condenses. This heat is distributed vertically, around the center of the storm. Thus, at any given altitude (except close to the surface where water temperature dictates air temperature) the environment inside the cyclone is warmer than its outer surroundings.

-Eye: A strong tropical cyclone will harbor an area of sinking air at the center of circulation. Weather in the eye is normally calm and free of clouds (however, the sea may be extremely violent). Eyes are home to the coldest temperatures of the storm at the surface, and the warmest temperatures at the upper levels. The eye is normally circular in shape, and may range in size from 8 km to 200 km (5 miles to 125 miles) in diameter. In weaker cyclones, the CDO covers the circulation center, resulting in no visible eye.

-Eyewall: The eyewall is a circular band of intense convection and winds immediately surrounding the eye. It has the most severe conditions in a tropical cyclone. Intense cyclones show eye-wall replacement cycles, in which outer eye walls form to replace inner ones. The mechanisms that make this occur are still not fully understood.

-Sea surface temperatures above 26.5 degrees Celsius to at least a depth of 50 meters. Warm waters are the energy source for tropical cyclones. When these storms move over land or cooler areas of water they weaken rapidly.

-Upper level conditions must be conducive to thunderstorm formation. Temperatures in the atmosphere must decrease quickly with height, and the mid-troposphere must be relatively moist.
A pre-existing weather disturbance. This is most frequently provided by tropical waves - non rotating areas of thunderstorms that move through the world's tropical oceans.

-A distance of approximately 10 degrees or more from the equator (2004's Hurricane Ivan, the strongest storm to be so close to the equator, started its formation at 9.7 degrees north). The Coriolis Effect initiates and helps maintain the rotation of a tropical cyclone. The absence of this effect at and near the equator prohibits development.

Tropical cyclones can occasionally form despite not meeting these conditions. A combination of a pre-existing disturbance, upper level divergence and a monsoon-related cold spell led to the creation of Typhoon Vamei at only 1.5 degrees north of the equator in 2001. It is estimated that the factors leading to the formation of this typhoon occur only once every 400 years.

When a tropical cyclone reaches higher latitudes or passes over land, it may merge with weather fronts or develop into a frontal cyclone, also called extratropical cyclone. In the Atlantic ocean, such tropical-derived cyclones of higher latitudes can be violent and may occasionally remain at hurricane-force wind speeds when they reach Europe as a European windstorm.

A tropical cyclone can cease to have tropical characteristics in several ways:

-It moves over land, thus depriving it of the warm water it needs to power itself, and quickly loses strength. Most strong storms become disorganized areas of low pressure within a day or two of landfall. There is, however, a chance they could regenerate if they manage to get back over open warm water. If a storm is over mountains for even a short time, it can rapidly lose strength. This is, however, the cause of many storm fatalities, as the dying storm unleashes torrential rainfall, and in mountainous areas, this can lead to deadly mudslides.

-It remains in the same area of ocean for too long, consuming all the heat available and dissipating.

-It experiences wind shear, causing the convection to lose direction and the heat engine breaks down.

-It can be weak enough to be consumed by another area of low pressure, disrupting it and joining to become a large area of non-cyclonic thunderstorms.

-It enters colder waters. This does not necessarily mean the death of the storm, but the storm will lose its tropical characteristics. These storms are extratropical cyclones.

Even after a tropical cyclone is said to be extratropical or dissipated, it can still have gale-force (or even hurricane-force) winds and drop several inches of rainfall.

In the 1960s and 1970s, the United States government attempted to weaken hurricanes in its Project Stormfury by seeding selected storms with silver iodide. It was thought that the seeding would disrupt the storm's eyewall, causing it to collapse and thus reduce the winds. However, it was later discovered that eyewall disruption happens naturally as part of eyewall replacement cycles, and so the success of the program was impossible to gauge.

Other approaches have been suggested over time, including cooling the water under a tropical cyclone by towing icebergs into the tropical oceans; covering the ocean in a substance that inhibits evaporation; or blasting the cyclone apart with nuclear weapons. These approaches all suffer from the same flaw: tropical cyclones are simply too large for any of them to be practical.

A mature tropical cyclone can release heat at a rate upwards of 6x1014 watts. This is two hundred times the total rate of human electrical production, and is equivalent to detonating a 10-megaton nuclear bomb every 20 minutes. Tropical cyclones on the open sea cause large waves, heavy rain, and high winds, disrupting international shipping and sometimes sinking ships. However, the most devastating effects of a tropical cyclone occur when they cross coastlines, making landfall. A tropical cyclone moving over land can do direct damage in four ways.

-Storm surge - Tropical cyclones cause an increase in sea level, which can flood coastal communities. This is the worst effect, as cyclones claim 80% of their victims when they first strike shore.

-Tornado activity - The broad rotation of a hurricane often spawns tornadoes. While these tornadoes are normally not as strong as their non-tropical counterparts, they can still cause tremendous damage.

Often, the secondary effects of a tropical cyclone are equally damaging. They include:

-Disease - The wet environment in the aftermath of a tropical cyclone, combined with the destruction of sanitation facilities and a warm tropical climate, can induce epidemics of disease which claim lives long after the storm passes.

The human toll of cyclones cannot be overlooked. However, cyclones may bring much-needed precipitation to otherwise dry regions. An appreciable percentage of Japan's rainfall is due to typhoons. Hurricane Camille averted drought conditions and ended water deficits along much of its path. Additionally, the destruction caused by Camille on the Gulf coast spurred redevelopment, multiplying many times the land values that existed before the storm. However, disaster officials point out that this is not necessarily a good thing; it just encourages more people to live in what is clearly a danger area for deadly storms.