A coral reef is a type of biotic reef developing in tropical waters. Although corals are major contributors to the overall framework and bulk material comprising a coral reef, the organisms most responsible for reef growth against the constant assault by ocean waves are calcareous algae, especially, although not entirely, species of red algae. 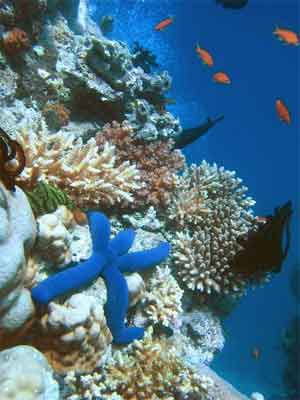 Water temperature of 20–28 °C (68–82 °F) is an optimal range for proper growth and health of coral reefs. Coral reefs are found in all oceans of the world, except the Arctic Ocean, generally between the Tropic of Cancer and the Tropic of Capricorn, because reef-building corals live in these waters. Reef-building corals are found mainly in the photic zone (<50m), where the sunlight reaches the ground and offers the corals enough energy. The corals themselves do not photosynthesise, but they live in a symbiotic relationship with types of microscopic algae that photosynthesise for them. Because of this, coral reefs also grow much faster in clear water, which absorbs less light.

Such reefs take a variety of forms, defined as the following;

* Apron reef — short reef resembling a fringing reef, but more sloped; extending out and downward from a point or peninsular shore.
* Fringing reef — reef extending directly out from a shoreline, and more or less following the trend of the shore.
* Barrier reef — reef separated from a mainland or island shore by a lagoon; see Great Barrier Reef.
* Patch reef — an isolated, often circular reef, usually within a lagoon or embayment.
* Ribbon reef — long, narrow, somewhat winding reef, usually associated with an atoll lagoon.
* Table reef — isolated reef, approaching an atoll type, but without a lagoon.
* Atoll reef — a more or less circular or continuous barrier reef surrounding a lagoon without a central island.