The Rhesus Macaque (Macaca mulatta), often called the Rhesus Monkey, is one of the best known species of Old World monkeys. It is a typical macaque, common throughout Afghanistan to northern India and southern China. Rhesus Macaques grow to a length of 64 centimetres, with tails reaching 30 centimetres. Males may weigh up to 6 kilograms, while females are around half the weight. They are brownish to grey in colour with pinkish faces. 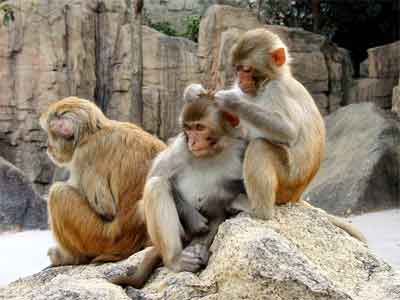 The Rhesus Monkey is well known to science owing to its relatively easy upkeep in captivity, having been used extensively in medical and biological research. It has given its name to the Rhesus factor, one of the elements of a person's blood group. Rhesus Monkeys were also used in the well-known experiments on maternal deprivation carried out in the 1950s by comparative psychologist Harry Harlow. NASA launched Rhesus Macaques into space during the 1950s and 60s.

In January of 2000, the Rhesus Macaque became the first cloned primate with the birth of Tetra. January 2001 saw the birth of ANDi, the first transgenic primate; ANDi carries foreign genes originally from a jellyfish.

Much of our knowledge of the natural behaviour of Rhesus Macaques comes from studies carried out on a colony established by the Caribbean Primate Research Center of the University of Puerto Rico on the island of Cayo Santiago, off Puerto Rico. There are no predators on the island, and humans are not permitted to land except as part of the research programmes. The colony is provisioned to some extent, but about 50% of its food comes from natural foraging.

Inhabiting arid, open areas, Rhesus Macaques may be found in grasslands, woodlands, and in mountainous regions up to 2,500 metres in elevation. They are good swimmers and are said to enjoy the activity. Rhesus Macaques are noted for their tendency to move from rural to urban areas, coming to rely on handouts or refuse from humans. They have become pests in some areas, perceived as a possible risk to public health and safety.

Diurnal animals, Rhesus Macaques are both arboreal and terrestrial; they are mostly herbivorous and feed on leaves and pine needles, roots, and the occasional insect or small animal. The monkeys have specialized pouch-like cheeks, allowing them to temporarily horde their food. The gathered morsels are eaten sometime later, in safe surroundings.