In 1524, Italian navigator Giovanni de Verrazzano explored the eastern shore and named the new lands Francesca, in honor of King Francis I of France. In 1534, Jacques Cartier planted a cross in the Gaspé peninsula and claimed the land in the name of King Francis I. However, France was initially not interested in backing up these claims with settlement. French fishing fleets, however, continued to sail to the Atlantic coast and into the St. Lawrence River, making alliances with Native American tribes that would become important once France began to occupy the land. French merchants soon realized the St. Lawrence region was full of valuable fur, especially beaver fur, which was becoming rare in Europe as the European beaver had almost been driven to extinction. Eventually, the French crown decided to colonize the territory to secure and expand its influence in America.

The vast territories that were to be known as Acadia and Canada were in some areas inhabited by nomadic Amerindian peoples or settlements of Hurons and Iroquois. These lands were full of unexploited and valuable natural riches which attracted all of Europe. By the 1580s, French trading companies had been set up, and ships were contracted to bring back furs. Much of what has happened between the natives and the European visitors around that time is not known for lack of historical records. 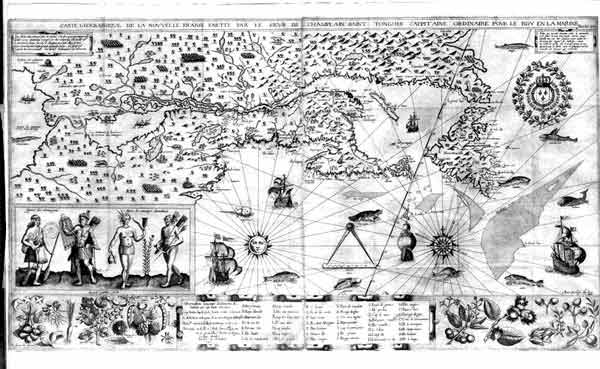 Early attempts at establishing permanent settlements were failures. In 1598 a trading post was established on Sable Island, off the coast of Acadia, but was unsuccessful. In 1600, a trading post was established at Tadoussac, but only five settlers survived the winter. In 1604 a settlement was founded at Île-Saint-Croix on Baie François (Bay of Fundy) which was moved to Port-Royal in 1605, only to be abandoned in 1607, reestablished in 1610 and destroyed in 1613 whereby settlers moved to other nearby locations.

In 1608, sponsored by Henry IV of France, Samuel de Champlain founded Québec with six families totalling 28 people, the first successful settlement in Canada. Colonization was slow and difficult. Many settlers died early. In 1630 there were only 100 colonists living in the settlement, and by 1640 there was 359.

Champlain quickly allied himself with the Algonquian and Montagnais peoples in the area, who were at war with the Iroquois. He also arranged to have young French men live with the natives, to learn their language and customs and help the French adapt to life in North America. These men, known as Voyageurs, such as Étienne Brûlé, extended French influence south and west to the Great Lakes and among the Huron tribes who lived there.

For the first few decades of Québec's existence, there were only a few dozen settlers there, while the English colonies to the south were much more populous and wealthy. Cardinal Richelieu, adviser to King Louis XIII, wished to make New France as significant as the English colonies. In 1627 Richelieu founded the Company of One Hundred Associates to invest in New France, promising land parcels to hundreds of new settlers and to turn Québec into an important mercantile and population colony. Champlain was named Governor of New France, and Richelieu forbade non-Roman Catholics from living there. Protestants were required to renounce their faith to establish themselves in New France; many chose instead to move to the English colonies. The Roman Catholic Church, and missionaries such as the Recollets and the Jesuits, became firmly established in the territory. Richelieu also introduced the seigneurial system, a semi-feudal system of farming that remained a characteristic feature of the St. Lawrence valley until the 19th century.

At the same time, however, the English colonies to the south began to raid the St. Lawrence valley, and in 1629 Québec itself was captured and held until 1632. Champlain returned to Québec that year, and requested that Sieur de Laviolette found another trading post at Trois-Rivières in 1634. Champlain died in 1635.

The Church, which after Champlain’s death was the most dominant force in New France, wanted to establish a utopian Christian community in the colony. In 1642, they sponsored a group of settlers led by Paul Chomedey de Maisonneuve who founded Ville-Marie, precursor to present-day Montreal, further up the St. Lawrence. Throughout the 1640s, Jesuit missionaries penetrated the Great Lakes region and converted many of the Huron natives. The missionaries came into conflict with the Iroquois, who frequently attacked Montreal. By 1649 both the Jesuit mission and Huron society in general were almost completely destroyed by Iroquois invasions. 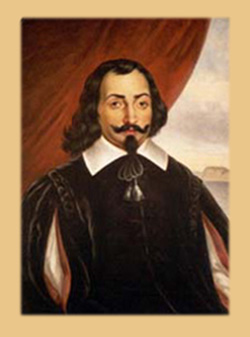 In the 1650s, Montreal still had only a few dozen settlers and a severely underpopulated New France almost fell completely to the Iroquois attempts to drive the French out. In 1660, settler Adam Dollard des Ormeaux led a Canadian and Huron militia against a much larger Iroquois force; none of the Canadians survived. In 1663 New France finally became more secure when Louis XIV made it a province of France. In 1665 he sent a French garrison, the Carignan-Salières regiment, to Québec. The government of the colony was reformed along the lines of the government of France, with the Governor General and Intendant subordinate to the Minister of the Marine in France. In 1665, Jean Talon was sent by Minister of the Marine Jean-Baptiste Colbert to New France as the first Intendant. These reforms limited the power of the Bishop of Québec, who had held the greatest amount of power after the death of Champlain.

The 1666 census of New France was conducted by France's intendant, Jean Talon in the winter of 1665-1666. It showed a population of 3215 habitants in New France, many more than there had been only a few decades earlier. But the census showed a great difference in the number of men (2034) and women (1181). As a result, and hoping to make the colony the centre of France's colonial empire, Louis XIV decided to dispatch more than 700 single women, aged between 15 and 30 (known as les filles du roi) to New France. At the same time, marriages with the natives were encouraged and indentured servants, known as engagés, were also sent to New France. One such engagé, Etienne Trudeau, was the ancestor of future Prime Minister of Canada Pierre Elliott Trudeau.

Talon also tried to reform the seigneurial system, forcing the seigneurs to actually reside on their land, and limiting the size of the seigneuries, in an attempt to make more land available to new settlers. These schemes were ultimately unsuccessful. Very few settlers arrived, and the various industries established by Talon did not surpass the importance of the fur trade.

Since Henry Hudson claimed Hudson Bay, James Bay and surrounding territory for the English, they had began expanding their boundaries across what is now the Canadian north beyond the French-held territory of New France. In 1670, with the help of French coureurs des bois, Pierre-Esprit Radisson and Médard des Groseilliers, the Hudson's Bay Company was established to control the fur trade in all the land that drained into Hudson Bay. This ended the French monopoly on the Canadian fur trade. To compensate, the French extended their territory to the south, and to the west of the American colonies. In 1682, René Robert Cavelier, Sieur de La Salle explored the Ohio and Mississippi valleys, and claimed the entire territory for France as far south as the Gulf of Mexico. He named this territory Louisiana. Although there was virtually no colonization in this part of New France, there were many strategic forts built there, under the orders of Governor Louis de Buade de Frontenac. Forts were also built in the older portions of New France that had not yet been settled.

In 1689 the English and Iroquois began an assault on New France, after many years of minor skirmishes throughout the English and French territories. This war, known as King William's War, ended in 1697, but a second war (Queen Anne's War) broke out in 1702. Québec survived the English invasions of both these wars, but Port Royal and Acadia fell in 1690. In 1713 peace came to New France with the Treaty of Utrecht. Although the treaty turned Newfoundland and part of Acadia (peninsular Nova Scotia) over to Britain, France remained in control of Île Royale (Cape Breton Island) and Fortress Louisbourg, as well as Île Saint-Jean (Prince Edward Island) and part of what is today New Brunswick.

After the treaty, New France began to prosper. Industries, such as fishing and farming, that had failed under Talon began to flourish. A "King’s Highway" was built between Montreal and Québec to encourage faster trade. The shipping industry also flourished as new ports were built and old ones were upgraded. The number of colonists greatly increased, and by 1720 Québec had become a self-sufficient colony with a population of 24,594 people. The Church, although now less powerful than it had originally been, had control over education and social welfare. These years of peace are often referred to by the French as New France's "Golden Age" but the aboriginal peoples regarded it as the continued decimation of their nations.

Peace lasted until 1744, when William Shirley, governor of Massachusetts, led an attack on Louisbourg. Both France and New France were unable to relieve the siege, and Louisbourg fell. France attempted to retake the fortress in 1746 but failed. It was returned under the Treaty of Aix-la-Chapelle, but this did not stop the warfare between the British and French in North America. In 1754 the French and Indian War began as the North American phase of the Seven Years' War (which did not technically begin in Europe until 1756), with the defeat of a small army led by Colonel George Washington by the French militia in the Ohio valley.

New France now had over 50,000 inhabitants, a vast increase from earlier in the century, but the British American colonies greatly outnumbered them with over one million people (including a substantial number of French Huguenots). It was much easier for the British colonists to organize attacks on New France than it was for the French to attack the British. In 1755 General Edward Braddock led an expedition against the French Fort Duquesne, and although they were numerically superior to the French militia and their Indian allies, Braddock's army was routed and Braddock was killed.

In 1758 Great Britain again captured Louisbourg, allowing them to blockade the entrance to the St. Lawrence River. This was essentially the death sentence of New France. In 1759 the British besieged Québec by sea, and an army under General James Wolfe defeated the French under General Louis-Joseph de Montcalm at the Battle of the Plains of Abraham in September. The garrison in Québec surrendered on September 18, and by the next year New France had been completely conquered by the British. The last French governor-general of New France, Pierre Francois de Rigaud, Marquis de Vaudreuil-Cavagnal, surrendered to British Major General Jeffrey Amherst on September 8, 1760. France finally ceded Canada to the British in the Treaty of Paris, signed on February 10, 1763.

French culture and religion remained dominant in most of the former territory of New France, until the arrival of British settlers led to the later creation of Upper Canada (today Ontario) and New Brunswick. The Louisiana Territory, under Spanish control since the end of the Seven Years' War, remained off-limits to settlement from the 13 American colonies. Following Napoleon Bonaparte's defeat of Spain, he took back the Louisiana Territory and in 1803 sold it to the new United States. This sale represented the end of the French colonial empire in North America except for the islands of St. Pierre and Miquelon which it still controls to this day.

This article is licensed under the GNU Free Documentation License. It uses material from the Wikipedia article "Canada".