Vinland (pronounced "Winland") was the name given to part of North America by the Icelandic Norseman Leif Eiríksson, about year 1000. Later archeological evidence of Norse settlement in North America was found in L'Anse aux Meadows in Newfoundland, Canada. Whether this was the Vinland of the Norse accounts is the subject of debate. It must be recognised that the Vikings did not perceive the exploration and settlement of Greenland and Vinland as any different than that of founding Iceland. It was merely an extension of their homeland and notions as to a different world only surfaced upon meeting the natives, noticeably different from Irish monks in Iceland. The colonization of the "New World" only occurred some time after Christopher Columbus discovered Central America for economic reasons. Vinland was first recorded by Adam of Bremen, a geographer and historian, in his book Descriptio insularum Aquilonis of approximately 1075. To write it he visited king Svend Estridson, who had knowledge of the northern lands. 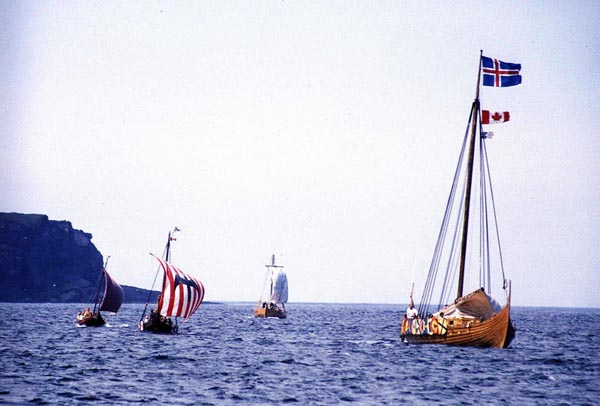 The main source of information about the Viking voyages to Vinland can be derived from two Icelandic sagas, The Saga of Eric the Red and the Saga of the Greenlanders. These sagas were written down approximately 250 years after the settlement of Greenland and are open to significant interpretation. Combining those two, it seems that there were a few separate attempts to establish a Norse settlement in Vinland, including one led by Þorfinnur Karlsefni, none of which lasted for more than two years. The disbandment of the small Viking colony probably had several causes. Disagreements among the men about the few women that followed on the trip, and fighting with the skrælingjar (Native Americans) already living on the land, are both indicated in the written sources.

The story tells that after the settlement of Greenland by the Vikings, a merchant by the name of Bjarni Herjólfsson, who was on his way to Iceland from Greenland, strayed off course due to a storm and thus accidentally discovered the east coast of America in 985 or 986. He then afterwards told the story and sold the ships to Leifur Eiríksson, who, according to the stories, sailed back to those areas. It was late in the summer, and he did not want to stay over winter in this new land, which he noted was covered with forests, so he did not land and managed to reach Greenland before winter fell. With wood being in very short supply in Greenland, the settlers there were eager to explore the riches of this new land. Some years later Leifur Eiríksson explored this coast, and established a short-lived colony on a part of the coast that he called Vinland.

The first discovery made by Leifur was according to the stories Helluland ("flatstone land"), possibly Baffin Island. Markland ("wood land"), possibly Labrador Peninsula was discovered next (there is some evidence that the tree line in northern Labrador has been diminished or eroded since circa 1000) and lastly Vinland (commonly interpreted as "wine land", but interpreted as "pasture land" by others), possibly Newfoundland. The expedition included both families and livestocks and the aims were to begin new settlements. Straumfjörður was the name of the northern settlement and Hóp was the name for the southern settlement. However, according to the stories it was cancelled soon due to conflicts with the "skrælingjar" (possibly the later Beothuks, or Dorset people). New voyages for woodcutting etc. seem to have been discussed even as late as the 1300s.

Until the 19th century, the idea of Viking settlement in North America was considered by historians to be the product of mere folk tales. The first scholarly theory for the idea was put forth in 1837 by Danish literary historian and antiquarian Carl Christian Rafn in his book Antiquitates Americanæ. Rafn had made an exhaustive examination of the sagas, as well as potential settlement sites on the North American coast and concluded that Vinland was a real place in North America that had been settled by the Norse.

Historians do not agree on the location of Vinland. Rafn believed that Vinland was probably in New England. In the 1960s a Viking settlement was discovered and excavated at L'Anse aux Meadows in Newfoundland, and many historians believe that this was Leifur's settlement, thus connecting Vinland to Newfoundland. Others have followed Rafn in sharing the belief that Vinland was farther to the south. In this view, L'Anse aux Meadows was perhaps part of an undocumented later attempt at settlement. 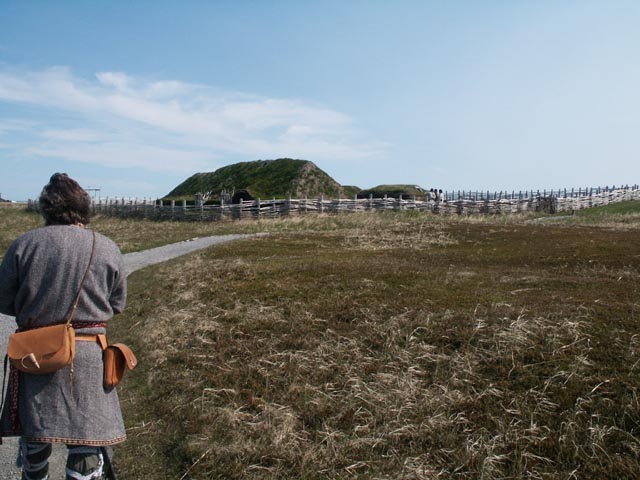 Those who believe Newfoundland is the location of Vinland generally think that settlements further south are unlikely, because maintaining such a distant lifestyle from the Norse homelands would have been far too difficult for the Vikings of the time. Iron and other European convenient resources would have been too difficult to sustain on any workable level, as the later English settlers in New England would later find. Costly fights with native populations so far from supply lines would have been another deterrent.

An argument for placing Vinland further south is Adam of Bremen's account. In his Descriptio insularum Aquilonis he wrote that the name Vinland comes from huge amounts of grapes growing there . He received this information from king Svend Estridson. However, grapes do not grow in the sites commonly seen as possible locations of Vinland. There are a number of theories to explain this discrepancy:

It was an early marketing attempt, something like the naming of Greenland by Erik the Red. In this theory, Leifur's naming of Markland and Vinland was to encourage others to explore and settle there.

A theory subject to much debate among scholars is that there was a misinterpretation of short-i Vinland as long-i Vinland (Viinland). In this theory Vinland's naming is based on the Old Norse word (short-i) 'vinja' meaning cereal grass. This theory can be combined with the previous one: Estridson might have embellished Adam's mistake if he believed it would increase the fame of Vinland for joint-financed ventures he would no doubt claim for himself. One problem with this theory is why it was not called vinjaland or vinjarland instead; a contraction needs to be posited to explain this. Another problem is why the sagas outside of Adam of Bremen's account also refer to double-i Viinland and mention vines as well. Since the sagas were written later, an explanation for this could be that the sagas were somehow influenced by Adam of Bremen's account.

Alternatively Estridson was joking or lying, or even referring to similarly sounding Wendland instead in an earlier account, where grapes did grow, and this was later confused with Vinland by Adam of Bremen.

Another theory is that we have not discovered the true location of Vinland yet, and it is further south, where grapes do grow. More subtly Vinland could be seen as a gateway or northern part, in reach of more temperate areas where grapes grew. Another possibility is that later, longer voyages further south, reporting Concord style grapes confused the story told about the settlement, as there were individuals of the crews who had ventured out on their own to return with tales.

Finally it has been speculated that grapes did in fact grow in the area in the past, but not anymore due to climatic changes. It may indeed have been warm enough for grapes to grow in Newfoundland as in present times grapes do grow at the same latitude in Europe (France and northern Italy) and North America (Washington State and southern British Columbia).

While the theory that Vinland was further south is a legitimate line of inquiry, for some the motivation to search Vinland further south could have been more personal to justify or romanticize the later (post-Columbian) history of Swedish and Danish colonization of areas in the present-day United States. There have been several instances where evidence of pre-Columbian presence of Norse explorers in the United States has been considered to be fake by most researchers, such as for example the Kensington Runestone. So far, the only evidence of the Norse in the United States that is generally accepted is the Maine Penny.

This article is licensed under the GNU Free Documentation License. It uses material from the Wikipedia article "Vinland".