The Yangtze River is the longest river in Asia and the third longest in the world after the Amazon in South America and the Nile in Africa. The Chinese name of the river is Chang Jiang (literally "Long River"), and this name is also found on many modern maps in English.

The name Yangzi (transliterated as Yangtze) was originally used by local people to refer to the lower reaches of the river. However, because this was the name first heard by missionaries and traders, it has been applied in English to the entire river. This name is found in many forms, including Yangtse River, Yangtsze Kiang, etc. Where it runs through deep gorges in parallel to the Mekong and the Salween before emerging onto the plains of Sichuan the river is known to the Chinese as the Jinsha river ('Golden Sands River'). The Yangtze is sometimes referred to as the Golden Waterway. 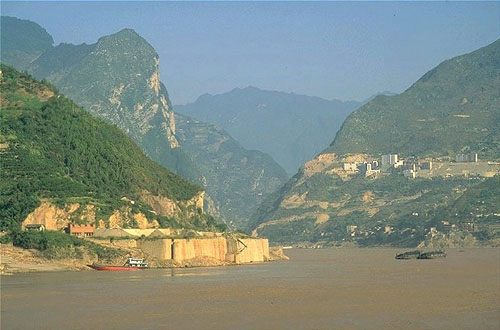 The river is about 6,380 km long. It has traditionally been considered a dividing point between north China and south China, although the Huai River also shares the claim.

The Yangtze flows into the East China Sea. As of June 2003, the Three Gorges Dam now spans the river, flooding Fengjie, the first of a number of towns affected by the massive flood control and power generation project. The project is the largest comprehensive irrigation project in the world. It will free people living along the river from floods that have repeatedly threatened them in the past, and will also offer them electricity and water transport - though at the expense of permanently flooding many existing towns and causing large-scale changes in local ecology.

The river is a major transportation artery for China connecting the interior with the coast. River traffic includes commercial traffic transporting bulk goods such as coal as well as manufactured goods and passengers. River cruises of several days duration especially through the beautiful and scenic Three Gorges area are becoming popular as a tourism industry grows in China.

This article is licensed under the GNU Free Documentation License. It uses material from the Wikipedia article "Yangtze River".