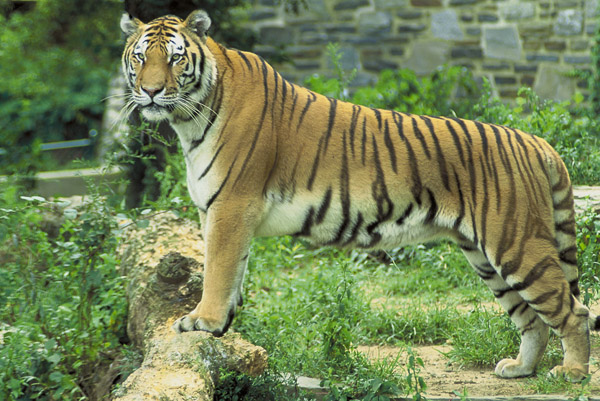 Tigers (Panthera tigris) are mammals of the Felidae family, one of four "big cats" that belong to the Panthera genus, and the largest of all cats, living or extinct. Tigers are predatory carnivores.

Most tigers live in forests and grasslands (for which their camouflage is ideally suited). Of all the big cats, only the tiger and jaguar are strong swimmers, and tigers may often be found bathing in ponds, lakes and rivers. Tigers hunt alone, and their diet consists primarily of medium-sized herbivores such as deer, wild pigs, and buffalo, but they will also take larger or smaller prey if the circumstances demand it. Humans are probably the tiger's only predator, often illegally killing tigers for their fur or their penises, believed to be aphrodisiacs. From the destruction of its habitat, to the poaching for the fur, tiger numbers have decreased in size and have been placed on the endangered species list. The tiger is one of many animals at the top of the food chain.

The ground of the coat may be any colour from yellow to orange-red, with white areas on the chest, neck, and the inside of the legs. A common recessive variant is the white tiger, which may occur with the correct combination of parents; they are not albinos. Black or melanistic tigers have been reported, but no live specimen has ever been recorded. Also in existence are golden tabby tigers (also called "golden tigers" or "tabby tigers") which have a golden hue, much lighter than the colouration of normal tigers, and stripes that are brown. This variation in colour is very rare, and only a handful of golden tabby tigers exist, all in captivity. There are also old texts referring to 'blue'or 'Maltese' tigers, actually a silvery-grey tone, though no reliable evidence has been found. 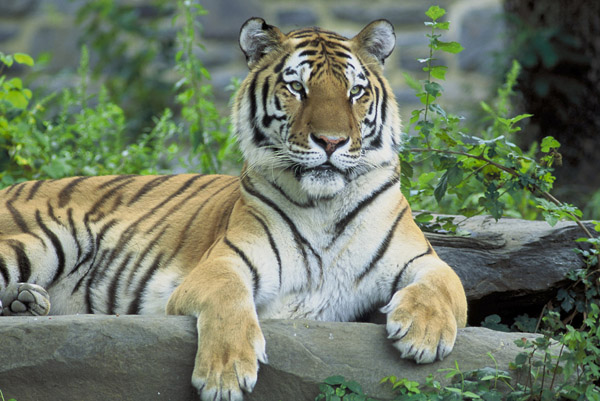 The stripes of most tigers vary from brown/grey to pure black, although white tigers have far fewer apparent stripes. The form and density of stripes differs between subspecies, but most tigers have in excess of 100 stripes. The now extinct Javan Tiger may have had far more than this. The pattern of stripes is unique to each animal, and thus could potentially be used to identify individuals, much in the same way as fingerprints are used to identify people. This is not, however, a preferred method of identification, due to the difficulty of recording the stripe pattern of a wild tiger. It seems likely that the purpose of stripes is camouflage, serving to hide these animals from their prey (few large animals have colour vision as capable as that of humans, so the colour is not so great a problem as one might suppose).

Tigers overpower their prey from any angle, usually from ambush, and bite the neck, often breaking the prey's spinal column or windpipe, or severing the jugular vein or carotid artery.

Powerful swimmers, tigers are known to kill prey while swimming. Some tigers have even ambushed boats for the fishermen on board or their catch of fish.

The tiger has certainly managed to appeal to man's imagination. Both Rudyard Kipling in The Jungle Books and William Blake in his Songs of Experience depict him as a ferocious, fearful animal. In The Jungle Books, the tiger Shere Khan is the biggest and most dangerous enemy of Mowgli, the uncrowned king of the jungle. Even in the Bill Watterson comic strip, Calvin and Hobbes, Hobbes the tiger sometimes escapes his role of cuddly animal. At the other end of the scale there is Tigger, the tiger from A. A. Milne's Winnie the Pooh stories, who is always happy and never induces fear. In the award winning A Tiger for Malgudi, a Yogi befriends a tiger.

A stylized tiger was a mascot of the 1988 Summer Olympic Games of Seoul. Tigers have been used in advertising such commodities as gasoline and breakfast cereal in long-standing advertising campaigns.

Most recently, Yann Martel won the Man Booker Prize in 2002 with his novel Life of Pi about an Indian boy castaway on the Pacific Ocean with a Royal Bengal Tiger.

Click here to go to our animal section Tiger page!

This article is licensed under the GNU Free Documentation License. It uses material from the Wikipedia article "Tiger".