The giraffe (Giraffa camelopardalis) is an even-toed ungulate mammal, the tallest of all land living animal species. Males can be 4.8 to 5.5 metres (16 to 18 feet) tall and weigh up to 900 kilograms (2000 pounds). Females are generally slightly shorter and weigh less. 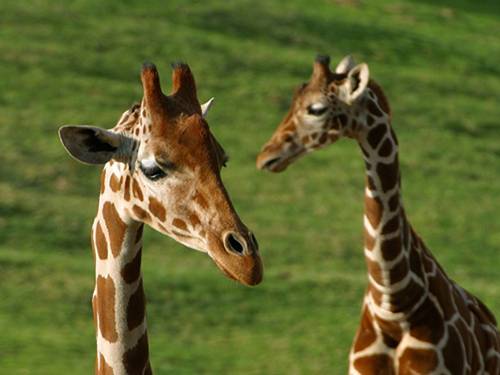 Native to Africa, the giraffe is related to deer and cattle, but is placed in a separate family, the Giraffidae, consisting only of the giraffe and its closest relative, the okapi.

There are nine generally accepted subspecies, differentiated by color and pattern variations and range: 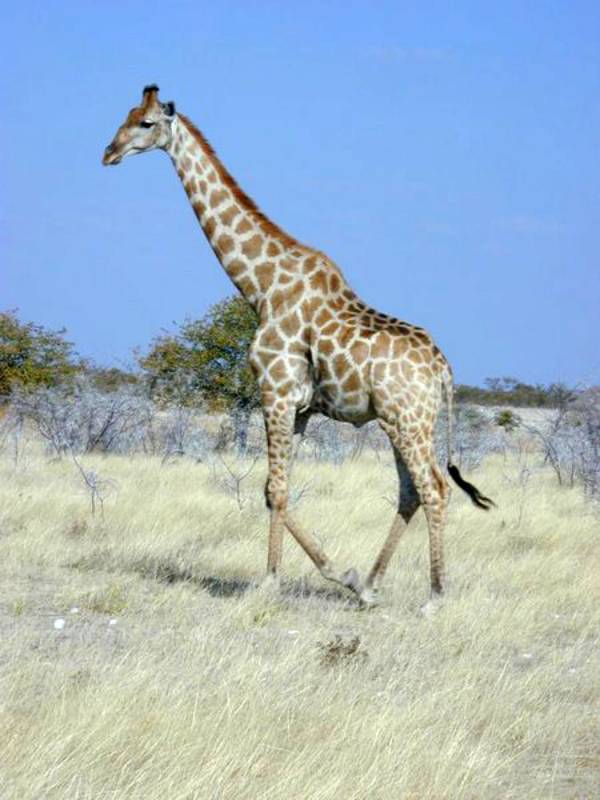 Giraffes are famous for their long necks which allow them to browse on the leaves of trees, and elongated forelegs (which are much longer than the hind legs). The bony structure of the neck is essentially unchanged from that of other mammals: there are no extra vertebrae, but each of the seven bones is greatly enlarged. Bone constitutes the bud-like horns called ossicorns, which are covered with the giraffe's skin like the rest of the skull.

Modifications to the giraffe's structure have evolved, particularly to the circulatory system. A giraffe's heart, which can weigh up to 24 lb (10 kg), has to generate around double the normal blood pressure for a large mammal in order to maintain blood flow to the brain against gravity. In the upper neck, a complex pressure-regulation system called the rete mirabile prevents excess blood flow to the brain when the giraffe lowers its head to drink. Conversely, the blood vessels in the lower legs are under great pressure (because of the weight of fluid pressing down on them). In other animals such pressure would force the blood out through the capillary walls: giraffes, however, have a very tight sheath of thick skin over their lower limbs which maintains high extravascular pressure in exactly the same way as a pilot's g-suit.

Giraffe gestation lasts between 14 and 15 months; a single calf is born. The mother gives birth standing up and the embryonic sack actually bursts when the baby falls to the ground. Newborn giraffes are about 1.8 metres tall. Within a few hours of being born, calves can run around and are indistinguishable from a calf that may be a week old already; however, for the first two weeks, they spend most of their time lying down, guarded by the mother. While adult giraffes are too large to be attacked by most predators, the young can fall prey to Lions, Leopards, hyenas, and African Hunting Dogs, it has been speculated that their characteristic spotted pattern provides a certain degree of camouflage. Only 25 to 50 percent of giraffe calves reach adulthood; those that do have a life expectancy of between 20 and 25 years.

In its native country the giraffe browses on the twigs of trees, preferring plants of the Mimosa genus; but it appears that it can without inconvenience live on other vegetable food. A giraffe can eat 63 kilograms (140 pounds) of leaves and twigs daily.

The pace of the giraffe is an amble, though when pursued it can run extremely fast. However, the small size of its lungs prevents it from supporting a lengthened chase.

The giraffe defends itself against the lion, its principal enemy, with its forefeet, with which it strikes with great force.

The giraffe has one of the shortest sleep requirement of any mammal, which is reckoned to be between 20 minutes and two hours in a 24 hour period.

Giraffes are thought to be mute. However, recent research has shown evidence that the animal communicates at an infrasound level with a surprising level of complexity.

This article is licensed under the GNU Free Documentation License. It uses material from the Wikipedia article "Giraffe".