The Roman Empire is the term conventionally used to describe the Roman polity in the centuries following its reorganization under the leadership of Octavian (better known as Caesar Augustus). Although Rome accumulated a collection of tribute-states in the centuries before the autocracy of Augustus, the pre-Augustan state is conventionally described as the Roman Republic.

Augustus' reorganization survived mostly unchanged until the Diocletian reform at end of the 3rd century, which turned the empire into a tetrarchy. Even if the political form give by Diocletian was short-lived, it led to the division of the Empire into two halves which allowed the Roman rule to continue for other two centuries over the whole empire, divided into Eastern and Western Roman Empire. The end of the Western Empire is traditionally set in 476, when Odovacar deposed the last Emperor and sent the Imperial insignia to Constantinople. After another millennium, in 1453, the Eastern Empire, better known as the Byzantine Empire, fell to the Ottoman Turks.

Because the empire of Rome lasted for such a long period of time 31 BC – 1453, there are certain alternative names used by historians to distinguish various semantic periods or eras. Such names include Byzantine Empire, Eastern Roman Empire and Western Roman Empire, which are used interchangably throughout this article to mean the same as Roman Empire. 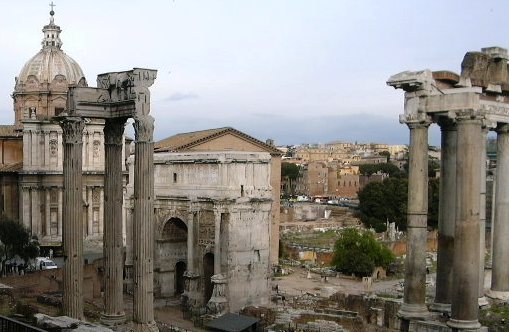 For many years historians made a distinction between the Principate, the period from Augustus until the Crisis of the Third Century, and the Dominate, the period from Diocletian until the end of the Empire in the West. According to this theory, during the Principate (from the Latin word princeps, meaning "first citizen", the only title Augustus would permit himself) the realities of dictatorship were concealed behind Republican forms; while during the Dominate (from the word dominus, meaning "Master") imperial power showed its naked face, with golden crowns and ornate imperial ritual. We now know that the situation was far more nuanced: certain historical forms continued until the Byzantine period, more than one thousand years after they were created, and displays of imperial majesty were common from the earliest days of the Empire.

The Roman Empire's influence on government, law, and monumental architecture, as well as many other aspects of Western life remains inescapable. Roman titles of power were adopted by successor states and other entities with imperial pretensions, including the Frankish kingdom, the Holy Roman Empire, the first and second Bulgarian empires, the Russian/Kiev dynasties, and the German Empire.

As a matter of convenience, the Roman Empire is held to have begun with the constitutional settlement following the Battle of Actium in 31 BC. In fact the Republican institutions at Rome had been destroyed over the preceding century and Rome had been effectively under one-man rule since the time of Sulla.

The reign of Augustus marks an important turning point, though. By the time of Actium, there was no one left alive who could recall functional Republican institutions or a time when there was no civil war in Rome. Forty-five years later, at Augustus's death, there would have been few living who could recall a time before Augustus himself. The average Roman had a life expectancy of only forty years. The long, peaceful and consensual reign of Augustus allowed a generation to live and die knowing no other form of rule, or indeed no other ruler. This was critically important to creating a mindset that would allow hereditary monarchy to exist in a Rome that had killed Julius Caesar for his regal pretensions. Whether or not the people of Rome welcomed one-man rule, in the Age of Augustus, it was all they knew, and so it would remain for many centuries.

This article is licensed under the GNU Free Documentation License. It uses material from the Wikipedia article "The Roman Empire".