Ancient Greece is the term used to describe the Greek-speaking world in ancient times. It refers not only to the territory of the present Greek state, but also to those areas settled in ancient times by Greeks: Cyprus, the Aegean coast of Turkey (then known as Ionia), Sicily and southern Italy (known as Great Greece), and the scattered Greek settlements on the coasts of what are now Albania, Bulgaria, Egypt, France, Libya, Romania, Spain, and Ukraine.

There are no fixed or universally agreed dates for the beginning or the end of the Ancient Greek period. In common usage it refers to all Greek history before the Roman Empire, but historians use the term more precisely. Some writers include the periods of the Minoan and Mycenaean civilizations (from about 1600 BC to about 1100 BC), while others argue that these civilizations, while Greek-speaking, were so different from later Greek cultures that they should be classed separately. 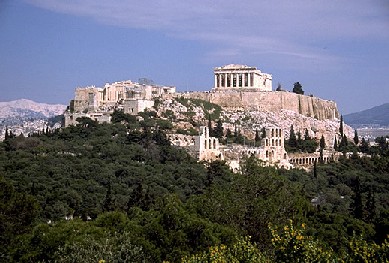 These dates are historians' conventions and some writers treat the Ancient Greek civilization as a continuum running until the advent of Christianity in the third century AD.

Ancient Greece is considered by most historians to be the foundational culture of Western Civilization. Greek culture was a powerful influence in the Roman Empire, which carried a version of it to many parts of Europe. Ancient Greek civilization has been immensely influential on the language, politics, educational systems, philosophy, art and architecture of the modern world, particularly during the Renaissance in Western Europe and again during various neo-Classical revivals in 18th and 19th century Europe and The Americas.

This article is licensed under the GNU Free Documentation License. It uses material from the Wikipedia article "Ancient Greece ".