Mount Elbrus is a peak located in the western Caucasus mountains, in Russia, near the border of Georgia. It is the highest mountain in the Caucasus which, together with Ural Mountains, is by historical convention only (rather than on any natural geographic basis) considered to be the border between Europe and Asia. The artificiality of the border in a geographic context was exemplified by the northern parts of the Caucasus often being considered to be in Europe, and the southern parts in Asia. Mt Elbrus at 5,642 m (18,506 ft) is considered to be the highest mountain in Europe.

Elbrus stands 20 km (12 mi) north of the main range of the Greater Caucasus and 65 km (40 mi) south-southwest of the Russian town of Kislovodsk. Its permanent icecap feeds 22 glaciers which in turn give rise to the Baksan, Kuban, and Malka Rivers. 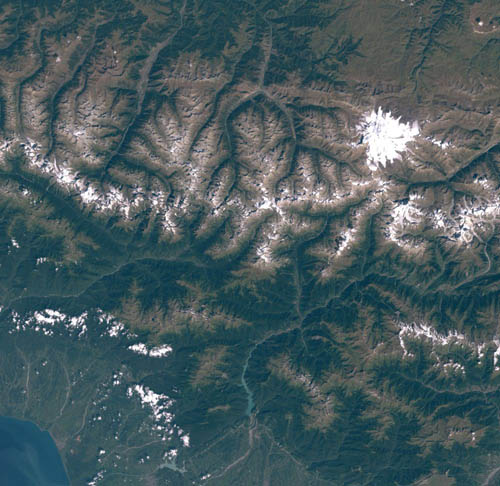 The ancients knew the mountain as Strobilus and believed that Prometheus was chained here. The lower of the two summits was first ascended in 1868 by Douglas Freshfield, A. W. Moore, and C. C. Tucker, and the higher (by about 40 m) in 1874 by a British expedition led by F. Crauford Grove. During the early years of the Soviet Union, mountaineering became a popular sport of the masses, and there was tremendous traffic on the mountain. In the winter of 1936, a very large group of inexperienced Komsomol members attempted the mountain, and ended up suffering many fatalities when they slipped on the ice and fell to their deaths. The Germans briefly occupied the mountain during World War II with 10,000 mountaineer soldiers; a possibly apocryphal story tells of a Soviet pilot being given a medal for bombing the main mountaineering hut, Pruit 11, while it was occupied. He was then later nominated for a medal for not hitting the hut, but instead the fuel supply, leaving the hut standing for future generations.

The Soviet Union encouraged ascents of Elbrus, and in 1956 it was climbed en masse by 400 mountaineers to mark the 400th anniversary of the annexation of Kabardino-Balkaria, the Autonomous Soviet Socialist Republic in which Elbrus was located.

From 1959 through 1976, a cable car system was built in stages which can take visitors as high as 3,800 meters. There are a wide variety of routes up the mountain, but the normal route, which is free of crevasses, continues more or less straight up the slope from the end of the cable car system. During the summer, it is not uncommon for 100 people to be attempting the summit via this route each day. The climb is not technically difficult, but it is physically arduous because of the elevations and the frequent strong winds.

The Caucasus Mountains are the result of a tectonic plate collision between the Arabian plate moving northward with respect to the Eurasian plate. They form a continuation of the Himalaya, which are being pressed upwards by a similar collison zone with the Eurasian and Indian plates. The entire region is regularly subjected to strong earthquakes from this activity, especially as the fault structure is complex with the Anatolia/Turkey and Iranian Blocks flowing sidewise, which prevents subduction of the advancing plate edge and hence the lack of volcanoes (though some minor dome structures, such as Elbrus' peaks, do exist).

Mount Elbrus should not be confused with the Alborz (also called Elburz) mountains in Iran.


This article is licensed under the GNU Free Documentation License. It uses material from the Wikipedia article "Mount Elbrus".