The Volga river in Western Russia, Europe's longest river, with a length of 3,690 km (2,293 miles), provides the core of the largest river system in Europe. In ancient times it was known as Atil, Itil or Idil.

Rising in the Valdai Hills 225 m (740 ft) above sea level north-west of Moscow and about 320 kilometres south-east of Saint Petersburg, the Volga heads east past Tver', Dubna, Yaroslavl, Nizhny Novgorod and Kazan (Qazan). From there it turns south, flows past Tolyatti, Samara and Volgograd, and discharges into the Caspian Sea below Astrakhan at 28 metres below sea level. 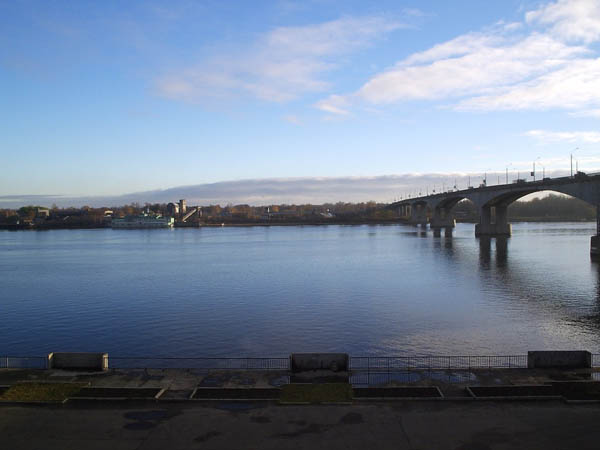 The Volga has many tributaries, most importantly the Kama, the Oka, the Vetluga, and the Sura rivers. The Volga and its tributaries form the Volga river system, which drains an area of about 1.35 million square kilometres in the most heavily populated part of Russia. The Volga Delta has a length of about 160 kilometres and includes as many as 500 channels and smaller rivers. The Volga freezes for most of its length during three months of each year.

It drains most of Western Russia and its many large reservoirs provide important irrigation and hydroelectric power. The Moscow-Volga Canal, the Volga-Don Canal, and the Mariinsk Canal system form navigable waterways connecting Moscow to the White Sea, the Baltic Sea, the Caspian Sea, the Sea of Azov and the Black Sea. High levels of chemical pollution currently give cause for environmental concern.

The fertile river valley provides a great wheat-growing region, and also has many mineral riches. A large petroleum industry centres on the Volga valley. Other minerals include natural gas, salt, and potash. The Volga Delta and the nearby Caspian Sea offer superb fishing grounds. Astrakhan, at the delta, is the centre of the caviar industry.

The ancient scholar Ptolemy of Alexandria mentioned the Volga in his Geography. The river basin played an important role in the great movements of people from Asia to Europe. A powerful Bulgarian empire once flourished where the Kama river joins the Volga. Also, Volga passed through the Khazar khaganate.

Volgograd witnessed the Battle of Stalingrad, the major victory of the Soviet Union over Germany in World War II. The Russian people's deep feeling for the Volga often finds echoes in their songs and literature.

This article is licensed under the GNU Free Documentation License. It uses material from the Wikipedia article "Volga River".