Monte Vesuvio, also Somma-Vesuvius or Somma-Vesuvio, Latin: Mons Vesuvius) is a volcano east of Naples, Italy. It is the only volcano on the European mainland to have erupted within the last hundred years, although it is not currently erupting. The only other two such volcanoes in Italy are located on islands. Vesuvius is situated on the coast of the Bay of Naples, about nine kilometers (six miles) to the east of the city and a short distance inland from the shore. It forms a conspicuous feature in the beautiful landscape presented by that bay, when viewed from the sea, with the city in the foreground. The mountain is notorious for its destruction of the Roman cities of Pompeii and Herculaneum in AD 79. It has erupted many times since and is today regarded as one of the most dangerous volcanoes in the world because of the population of three million people now living close to it coupled with its tendency towards explosive eruptions. 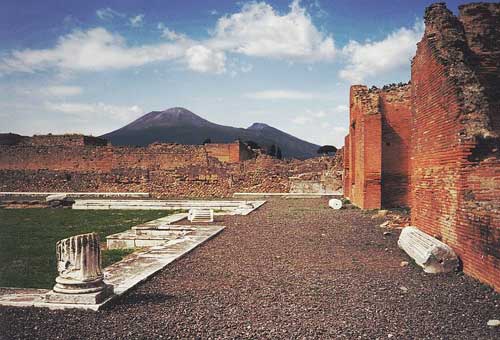 Ruins of Pompeii with Mount Vesuvius in the background

Mount Vesuvius was regarded by the Greeks and Romans as being sacred to the hero and demigod Hercules/Heracles, and the town of Herculaneum, built at its base, was named after him. The mountain is also named after Hercules in a less direct manner: he was the son of the god Zeus and Alcmene of Thebes. Zeus was also known as Ves in his aspect as the god of rains and dews. Hercules was thus alternatively known as Vesouvios, "Son of Ves." This name was corrupted into "Vesuvius." According to other sources, Vesuvius came from the Oscan word fesf which means "smoke." There is a theory that the name "Vesuvius" is derived from the Indo-European root ves- = "hearth".

The height of the main cone has been constantly modified by eruptions but presently stands at 1,281m (4,202ft). Monte Somma is 1,149m (3,770ft) high, separated from the main cone by the valley of Atrio di Cavallo, which is some 3 miles (5 km) long. The slopes of the mountain are scarred by lava flows but are heavily vegetated, with scrub at higher altitudes and vineyards lower down. It is still regarded as an active volcano although its activity currently is limited to little more than steam from vents at the bottom of the crater. Vesuvius is a composite volcano at the convergent boundary where the African Plate is being subducted beneath the Eurasian Plate. Its lava is composed of viscous andesite. Layers of lava, scoriae, ashes, and pumice make up the mountain.

Vesuvius has erupted repeatedly in recorded history, most famously in 79 and subsequently in 472, 512, in 1631, six times in the 18th century, eight times in the 19th century (notably in 1872), and in 1906, 1929, and 1944. There has been no eruption since 1944. The eruptions vary greatly in severity but are characterized by explosive outbursts of the kind dubbed Plinian after the Roman writer who observed the AD 79 eruption. On occasion, the eruptions have been so large that the whole of southern Europe has been blanketed by ashes; in 472 and 1631, Vesuvian ashes fell on Constantinople (now known as Istanbul), over 1,000 miles away.

The mountain started forming 25,000 years ago. Although the area has been subject to volcanic activity for at least 400,000 years, the lowest layer of eruption material from the Somma mountain lies on top of the 34,000 year-old Campanian Ignimbrite produced by the Campi Flegrei complex, and was the product of the Cordola plinian eruption 25,000 years ago. 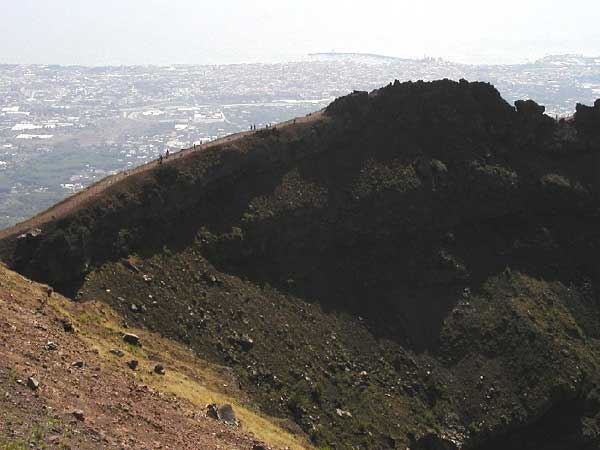 Crater of Mount Vesuvius, with the city of Naples in the background.

It was then built up by a series of lava flows, with some smaller explosive eruptions interspersed between them. However, the style of eruption changed around 19,000 years ago to a sequence of large explosive plinian eruptions, of which the 79 AD one was the last. The eruptions are named after the tephra deposits produced by them. The volcano then entered a stage of more frequent, but less violent, eruptions until the most recent plinian eruption which destroyed Pompeii.

The last of these may have been in 217 BC. There were earthquakes in Italy during that year and the sun was reported as being dimmed by a haze or dry fog. Plutarch wrote of the sky being on fire near Naples and Silius Italicus mentioned in his epic poem Punica that Vesuvius had thundered and produced flames worthy of Mount Etna in that year, although both authors were writing around 250 years later. Greenland ice core samples of around that period show relatively high acidity, which is assumed to have been caused by atmospheric hydrogen sulfide.

The mountain was then quiet for hundreds of years and was described by Roman writers as having been covered with gardens and vineyards, except at the top which was craggy. Within a large circle of nearly perpendicular cliffs was a flat space large enough for the encampment of the army of the rebel gladiator Spartacus in 73 BC. This area was doubtless a crater. The mountain may have had only one summit at that time, judging by a wall painting, "Bacchus and Vesuvius", found in a Pompeiian house, the House of the Centenary (Casa del Centenario).

Several surviving works written over the 200 years preceding the 79 AD eruption describe the mountain as having had a volcanic nature, although Pliny the Elder did not depict the mountain in this way in his Naturalis Historia. The area was then, as now, densely populated with villages, towns and small cities like Pompeii, and its slopes were covered in vineyards and farms. 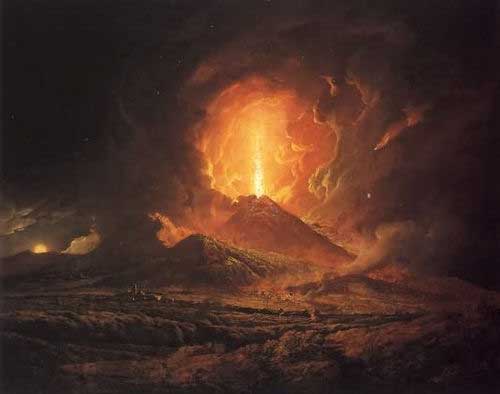 An eruption of Vesuvius seen from Portici, by Joseph Wright (ca. 1774-6)

Estimates of the population of Pompeii range from 10,000 to 20,000, whilst Herculaneum is thought to have had a population of about 5000. It is not known how many people the eruption killed; although around 1150 remains of bodies have been recovered, or casts made of their impressions in the ash deposits in and around Pompeii. The remains of about 350 bodies have been found at Herculaneum (300 in arched vaults discovered in 1980). However these figures must represent a great underestimate of the total number of deaths over the region affected by the eruption.

Herculaneum, which was much closer to the crater, was saved from tephra falls by the wind direction, but was buried under 23m (75ft) of material deposited by pyroclastic surges. It is likely that most, or all, of the victims in this town were killed by the surges, particularly given evidence of high temperatures found on the skeletons of the victims found in the arched vaults.

Pompeii and Herculaneum were never rebuilt, although surviving townspeople and probably looters did undertake extensive salvage work after the destructions. The towns' locations were eventually forgotten until their accidental rediscovery in the 18th century. Vesuvius itself underwent major changes - its slopes were denuded of vegetation and its summit had changed considerably due to the force of the eruption.

Since the eruption of 79, Vesuvius has erupted around three dozen times. It erupted again in 203, during the lifetime of the historian Cassius Dio. In 472, it ejected such a volume of ash that ashfalls were reported as far away as Constantinople. The eruptions of 512 were so severe that those inhabiting the slopes of Vesuvius were granted exemption from taxes by Theodoric the Great, the Gothic king of Italy. Further eruptions were recorded in 787, 968, 991, 999, 1007 and 1036 with the first recorded lava flows. The volcano became quiescent at the end of the 13th century and in the following years it again became covered with gardens and vineyards as of old. Even the inside of the crater was filled with shrubbery.

The volcano has been quiescent ever since. Over the past few centuries, the quiet stages have varied from 18 months to 7½ years, making the current lull in activity the longest in nearly 500 years. While Vesuvius is not thought likely to erupt in the immediate future, the danger posed by future eruptions is seen as very high in the light of the volcano's tendency towards sudden extremely violent explosions and the very dense human population on and around the mountain.

This article is licensed under the GNU Free Documentation License. It uses material from the Wikipedia article "Vesuvius".