Charlemagne (2 April 742 or 747 – 28 January 814) (also Charles the Great; from Latin, Carolus Magnus or Karolus Magnus), son of King Pippin the Short and Bertrada of Laon, was the king of the Franks from 768 to 814 and king of the Lombards from 774 to 814. He was crowned Imperator Augustus in Rome on Christmas Day, 800 by Pope Leo III and is therefore regarded as the founder of the Holy Roman Empire, a reincarnation of the ancient Western Roman Empire. Through military conquest and defense, he solidified and expanded his realm to cover most of Western Europe and is today regarded as the founding father of both France and Germany. His was the first truly imperial power in the West since the fall of Rome. 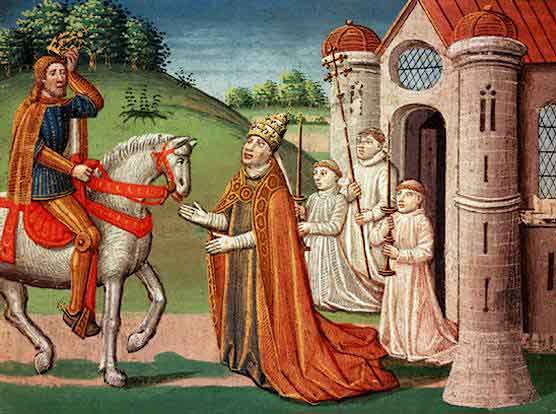 Charlemagne was the eldest child of Pippin the Short (714 – 24 September 768, reigned from 751) and his wife Bertrada of Laon (720 – 12 July 783), daughter of Caribert of Laon and Bertrada of Cologne. The reliable records name only Carloman and Gisela as his younger siblings. Later accounts, however, indicate that Redburga, wife of King Egbert of Wessex, might have been his sister (or sister-in-law or niece), and the legendary material makes him Roland's maternal nephew through Lady Bertha.

On the death of Pippin, the kingdom of the Franks was divided—following tradition—between Charlemagne and Carloman. Charles took the outer parts of the kingdom, bordering on the sea, namely Neustria, western Aquitaine, and the northern parts of Austrasia, while Carloman retained the inner parts: southern Austrasia, Septimania, eastern Aquitaine, Burgundy, Provence, and Swabia, lands bordering on Italy. Perhaps Pippin regarded Charlemagne as the better warrior, but Carloman may have regarded himself as the more deserving son, being the son, not of a mayor of the palace, but of a king.

The brothers maintained not-so-friendly, not-so-hateful relations with the assistance of their mother Bertrada, but Charlemagne signed a treaty with Duke Tassilo III of Bavaria and married Gerperga, daughter of King Desiderius of the Lombards, in order to surround Carloman with his own allies. Though Pope Stephen III first opposed the marriage with the Lombard princess, he would have little to fear of a Frankish-Lombard alliance in a few months.

Charlemagne was engaged in almost constant battle throughout his reign, with his legendary sword Joyeuse in hand. After thirty years of war and eighteen battles—the Saxon Wars—he conquered Saxonia and proceeded to convert the conquered to Roman Catholicism, using force where necessary.

During the first peace of any substantial length (780-782), Charles began to appoint his sons to positions of authority within the realm, in the tradition of the kings and mayors of the past. In 780, he had disinherited his eldest son, Pippin the Hunchback, because the youth had joined a rebellion against him. Pippin had been duped, through flattery, into joining a rebellion of nobles who pretended to despise Charles' treatment of Himiltrude, Pippin's mother, in 770. Charles baptized his son Carloman as Pippin to keep the name alive in the dynasty. In 781, he made his oldest three sons each kings. The eldest, Charles, received the kingdom of Neustria, containing the regions of Anjou, Maine, and Touraine. The second eldest, Pippin, was made king of Italy, taking the Iron Crown which his father had first born in 774. His third eldest son, Louis, became king of Aquitaine. He tried to make his sons a true Neustrian, Italian, and Aquitainian and he gave their regents some control of their subkingdoms, but real power was always in his hands, though he intended each to inherit their realm some day.

The conquest of Italy brought Charlemagne in contact with the Saracens who, at the time, controlled the Mediterranean. Pippin, his son, was much occupied with Saracens in Italy. Charlemagne conquered Corsica and Sardinia at an unknown date and in 799 the Balearic Islands. The islands were often attacked by Saracen pirates, but the counts of Genoa and Tuscany kept them at bay with large fleets until the end of Charlemagne's reign. Charlemagne even had contact with the caliphal court in Baghdad. In Hispania, the struggle against the Moors continued unabated throughout the latter half of his reign. His son Louis was in charge of the Spanish border. In 785, his men captured Gerona permanently and extended Frankish control into the Catalan littoral for the duration of Charlemagne's reign (and much longer, it remained nominally Frankish until the Treaty of Corbeil in 1258). The Moslem chiefs in the northeast of Spain were constantly revolting against Cordoban authority and they often turned to the Franks for help. The Frankish border was slowly extended until 795, when Gerona, Cardona, Ausona, and Urgel were united into the new Spanish March, within the old duchy of Septimania.

Matters of Charlemagne's reign came to a head in late 800. In 799, Pope Leo III had been mistreated by the Romans, who tried to tear out his tongue and eyes. He was deposed and put in a monastery, but Charlemagne did not recognize this, as his advisor, Alcuin of York, advised. He went down to Rome in November 800 and held a council on December 1. On December 23, Leo swore an oath of innocence. At Mass, on Christmas Day (December 25), the pope crowned Charlemagne Imperator Romanorum (emperor of the Romans) in Saint Peter's Basilica. Charlemagne thus became the renewer of the Western Roman Empire, which had expired in the 476. To avoid frictions with the Byzantine Emperor, Charles later styled himself, not Imperator Romanorum (a title reserved for the Byzantine emperor), but rather Imperator Romanum gubernans Imperium (emperor ruling the Roman Empire).

In 813, Charlemagne called Louis, his only surviving legitimate son, to his court. There he crowned him as his heir and sent him back to Aquitaine. He then spent the autumn hunting before returning to Aachen on 1 November. In January, he fell ill. He took to his bed on the 22 January and as Einhard tells it:

"He died January twenty-eighth, the seventh day from the time that he took to his bed, at nine o'clock in the morning, after partaking of the holy communion, in the seventy-second year of his age and the forty-seventh of his reign."

When Charlemagne died in 814, he was buried in his own Cathedral at Aachen. He was succeeded by his only son then surviving, Louis the Pious. His empire lasted only another generation in its entirety; its division, according to custom, between Louis's own sons after their father's death laid the foundation for the modern states of France and Germany. 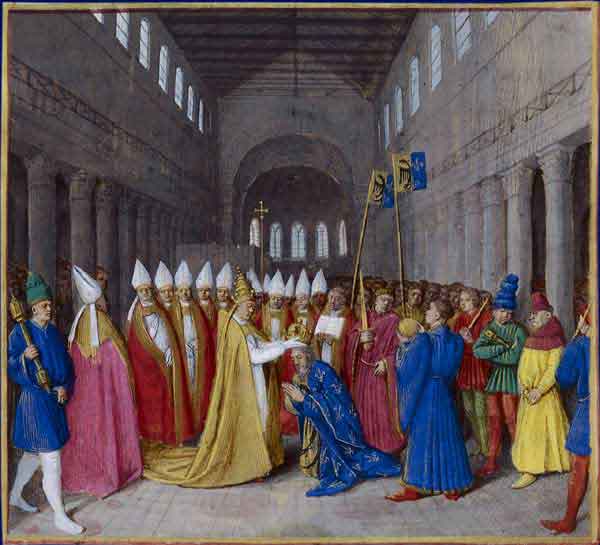 A part of Charlemagne's success as warrior and administrator can be traced to his admiration for learning. His reign and the era it ushered in are often referred to as the Carolingian Renaissance because of the flowering of scholarship, literature, art, and architecture which characterize it. Most of the surviving works of classical Latin were copied and preserved by Carolingian scholars. Indeed, the earliest manuscripts available for many ancient texts are Carolingian and it is almost certain that a text which survived to the Carolingian age, survives still. The pan-European nature of Charlemagne's influence is indicated by the origins of many of the men who worked for him: Alcuin, an Anglo-Saxon from York; Theodulf, a Visigoth, probably from Septimania; Paul the Deacon, a Lombard; and Angilbert and Einhard, Franks.

Charlemagne took a serious interest in his and others' scholarship and had learned to read in his adulthood, although he never quite learned how to write, he used to keep a slate and stylus underneath his pillow, according to Einhard. His handwriting was bad, from which grew the legend that he could not write. Even learning to read was quite an achievement for kings at this time, of whom most were illiterate. Charlemagne's mother tongue was the Old High German dialect called Frankish. He also spoke Latin and understood some Greek.

Charlemagne, being a model knight as one of the Nine Worthies, enjoyed an important afterlife in European culture. One of the great medieval literary cycles, the Charlemagne cycle or the Matter of France, centers around the deeds of Charlemagne and his historical commander of the Breton border, Roland, and the paladins who are analogous to the knights of the Round Table or King Arthur's court. Their tales constitute the first chansons de geste.

Charlemagne himself was accorded sainthood inside the Holy Roman Empire after the twelfth century. His canonization by Antipope Paschal III, to gain the favor of Frederick Barbarossa in 1165, was never recognized by the Holy See, which annulled all of Paschal's ordinances at the the Third Lateran Council in 1179. However, he has been acknowledged as cultus confirmed. 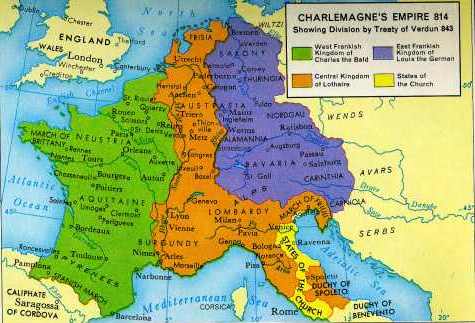 It is frequently claimed by genealogists that all people with European ancestry alive today are probably descended from Charlemagne. However, only a small percentage can actually prove descent from him. Charlemagne's marriage and relationship politics and ethics did, however, result in a fairly large number of descendants, all of whom had far better life expectancies than is usually the case for children in that time period. They were married into houses of nobility and as a result of intermarriages many people of noble descent can indeed trace their ancestry back to Charlemagne. He is without a doubt an ancestor of every royal family of Europe.

This article is licensed under the GNU Free Documentation License. It uses material from the Wikipedia article "Charlemagne".