Wine is an alcoholic beverage produced by the fermentation of grapes and grape juice. Wine-like beverages can be produced by the fermentation of other fruits and flowers (fruit or country wines), barley (barley wine), rice (sake), honey (mead), and even herbs (Chinese wine). However, in such cases a qualifier is often legally required (e.g., "elderberry wine"). The English word wine and its equivalents in other languages are protected by law in many jurisdictions.

Little is known of the prehistory of wine. It is plausible that early foragers and farmers made alcoholic beverages from wild fruits, including wild grapes (Vitis sylvestris). This would have been easier following the development of pottery vessels in the later Neolithic of the Near East, about 9000 years ago. However, wild grapes are small and sour, and relatively rare at archaeological sites. It is unlikely they could have been the basis of a wine industry. 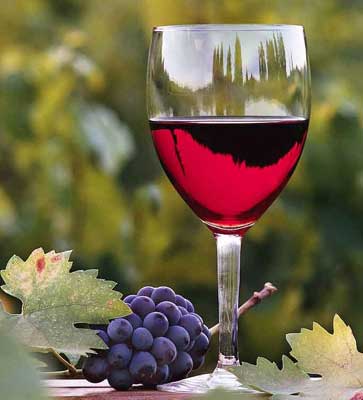 Exactly where wine was first made will probably never be known. It could have been anywhere in the vast region, stretching from Spain to Central Asia, where wild grapes grow. However, the first large-scale production of wine must have been in the region where grapes were first domesticated, the Near East. Wild grapes grow in the northern Levant, coastal and southeastern Turkey, the Caspian coast of Iran, Armenia, and Georgia. None of these areas can be singled out, despite persistent suggestions that Georgia is the birthplace of wine. In Ancient Egypt, wine played an important part in ceremonial life. A thriving royal wine making industry was established in the Nile Delta following the introduction of grape cultivation from the Levant to Egypt c. 3000 BC. The industry was most likely the result of trade between Egypt and Canaan during the Early Bronze Age, commencing from at least the Third Dynasty (2650 – 2575 BC), the beginning of the Old Kingdom period (2650 – 2152 BC). Winemaking scenes on tomb walls, and the offering lists that accompanied them, included wine that was definitely produced at the deltaic vineyards. By the end of the Old Kingdom, five wines, all probably produced in the Delta, constitute a canonical set of provisions, or fixed "menu," for the afterlife. The advent of wine in Europe was the work of the Greeks who spread the art of grape-growing and winemaking in Ancient Greek and Roman times.

Wine is usually made from one or more varieties of the European species, Vitis vinifera. When one of these varieties, such as Pinot Noir, Chardonnay, or Merlot, for example, is used as the predominant grape (usually defined by law as a minimum of 75 or 85%) the result is a varietal, as opposed to a blended wine. Blended wines are in no way inferior to varietal wines; indeed, some of the world's most valued and expensive wines from the Bordeaux, Rioja or Tuscany regions, are a blend of several grape varieties of the same vintage. 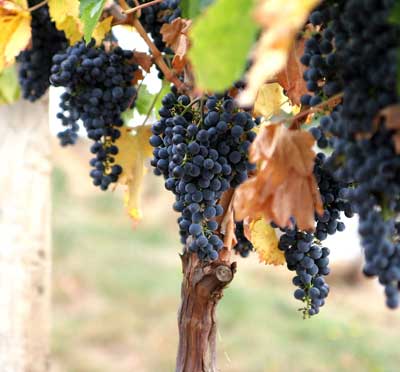 Wines may be classified by vinification methods. These include classifications such as sparkling, still, fortified, rosé, and blush. The color of wine is not determined by the juice of the grape, which is almost always clear, but rather by the presence or absence of the grape skin during fermentation. Grapes with colored juice are known as teinturiers, such as alicante bouchet. Red wine is made from red (or black) grapes, but its red color is bestowed by the skin being left in contact with the juice during fermentation. White wine can be made from any color of grape as the skin is separated from the juice during fermentation. A white wine made from a very dark grape may appear pink or 'blush'. Rosé wines are a compromise between reds and whites: a small amount of red wine is blended with a white wine. Another form of Rosé is called Blanc de Noir where the juice of red grapes are allowed contact with the skins for a very short time (usually only a couple of hours).

Sparkling wines, such as champagne, are those with carbon dioxide, either from fermentation or added later. They vary from just a slight bubbliness to the classic Champagne. To have this effect, the wine is fermented twice, once in an open container to allow the carbon dioxide to escape into the air, and a second time in a sealed container, where the gas is caught and remains in the wine.

Wines may be classified by the year in which the grapes are harvested, known as the "vintage". "Vintage wines" are made from grapes of a single year's harvest, and are accordingly dated. These wines often improve in flavor as they age, and wine enthusiasts will occasionally save bottles of a favorite vintage wine for future consumption. Superior vintages, from reputable producers and regions, will often fetch much higher prices than their average vintages. Some vintage wines are only made in better-than-average years. Conversely, wines such as White Zinfandel, which don't age well, are made to be drunk immediately and may not be labeled with a vintage year. There are exceptions though. French Champagne is often non-vintage, but still expensive. It can sometimes profit from aging 2-3 years and some Prestige Cuvées even much longer. 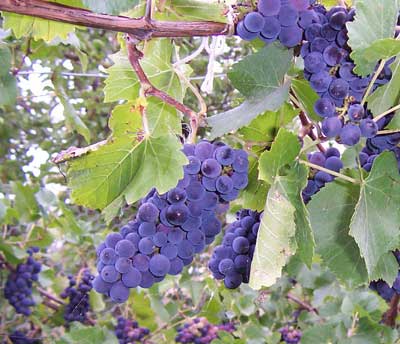 At the highest end, rare, super-premium wines are amongst the most expensive of all foodstuffs, and outstanding vintages from the best vineyards may sell for thousands of dollars per bottle. Red wines, at least partly because of their ability to form more complex subtleties, are typically the most expensive. Such wines are often at their best years, or sometimes decades, after bottling. On the other hand, they may spoil after such long storage periods, unbeknownst to the drinker about to open the bottle. Part of the expense associated with high-end wine comes from the number of bottles which must be discarded in order to produce a drinkable wine. Restaurants will often charge between two to five times the price of what a wine merchant may ask for an exceptional vintage. This is for a reason: diners will often return wines that have spoilt and not bear the expense. For restaurateurs, serving old vintages is a risk that is compensated through elevated prices. Some high-end wines are veblen goods (for conspicuous consumption).

Wine is also used in religious ceremonies in many cultures and the wine trade is of historical importance for many regions. The New Testament even states that Jesus' very first miracle was to turn water into wine (John 2:1-11), and the Old Testament states that the fermentation of grapes was first discovered by Noah after the great flood described in Genesis. (Gen. 9:20-21) Wine remains an essential part of the Eucharistic rites in the Orthodox, Catholic, Lutheran and Anglican denominations of Christianity.

The health effects of wine (and alcohol in general) are the subject of considerable ongoing debate and study. In the USA, a boom in red wine consumption was touched off in the 1990s by '60 Minutes', and other news reports on the French paradox. 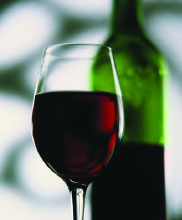 It now seems clear that regular consumption of up to 1-2 drinks a day (1 standard drink is approximately equal to 5 oz, or 125 ml, of 13% wine) does reduce mortality, due to 10%–40% lower risk of coronary heart disease, for those over the age of 35 or so (see Alcohol consumption and health). Originally, the effect was observed with red wine. Compounds, known as polyphenols, are found in larger amounts in red wine, and there is some evidence that these are especially beneficial. One particularly interesting polyphenol found in red wine is resveratrol, to which numerous beneficial effects have been attributed. Red wine also contains a significant amount of flavonoids and red anthocyanin pigments that act as antioxidants. With excessive consumption, however, any health benefits are offset by the increased rate of various alcohol-related diseases, primarily cancers of mouth, upper respiratory tract, and ultimately, cirrhosis of liver.

This article is licensed under the GNU Free Documentation License. It uses material from the Wikipedia article "Wine".