A hedgehog is any of the small spiny mammals of the subfamily Erinaceinae and the order Insectivora. There are 15 species of hedgehog in four genera, found through parts of Europe, Asia, Africa, and New Zealand. There are no hedgehogs native to the Americas or Australia. Hedgehogs are easily distinguished by their spines, which are hollow hairs made stiff with keratin. Their spines are not poisonous or barbed and, unlike the quills of a porcupine, cannot easily be removed from the animal. However, spines normally come out when a hedgehog sheds baby spines and replaces them with adult spines around their first year. When under extreme stress or during sickness (often both), a hedgehog will lose spines. Hedgehogs are most closely related to gymnures and other insectivores, including moles, shrews, tenrecs and solenodons. 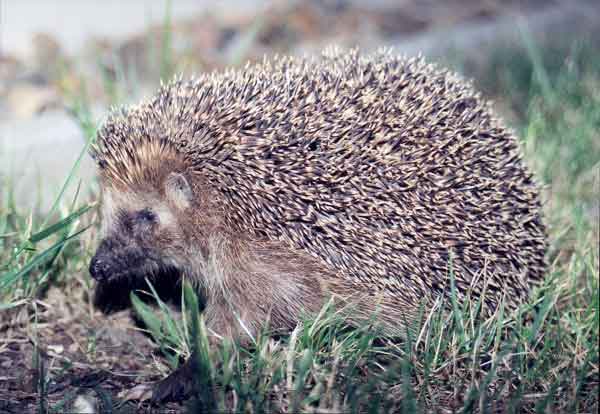 A defense that all species of hedgehogs possess is the ability to roll into a tight ball, causing all of the spines to point outwards. However, its effectiveness depends on the number of spines, and since some of the desert hedgehogs evolved to carry less weight, they are much more likely to try to run away and sometimes even attack the intruder, trying to ram into him with their needles, leaving rolling as a last resort. This results in a different number of predators for different species: while forest hedgehogs have relatively few, primarily birds (especially owls) and ferrets, smaller species like long-eared hedgehogs are preyed on by foxes, wolves and mongooses.

All hedgehogs are primarily nocturnal, although different species can be more or less likely to come out in the daytime. The hedgehog sleeps for a large portion of the daytime either under cover of bush or grass or rock or in a hole in the ground. Again, different species can have slightly different habits, but in general hedgehogs dig out dens for shelter. All wild hedgehogs can hibernate, although not all do; hibernation depends on temperature, abundance of food and species. Hedgehogs are fairly vocal, and communicate not only in a series of grunts and snuffles, but sometimes in loud squeals (depending on species).

Although belonging to insectivore family, hedgehogs are almost omnivorous. Hedgehogs feed on insects, snails, frogs and toads, snakes, bird eggs, carrion, mushrooms, grass roots, berries, melons, and watermelons. In fact, berries constitute a major part of an Afghan Hedgehog's diet in early spring after hibernation. The hedgehog is occasionally spotted after a rainstorm foraging for earthworms. Although forest hedgehogs, most well-known to Europeans, are indeed mainly insectivores, this is not necessarily true for other species.

In areas that have hedgehogs in the wild, they are often welcome as a natural form of garden pest control. Many people leave food out to attract hedgehogs. However, hedgehogs are lactose-intolerant but will eagerly consume cheese, milk, and dairy products, causing illness. Dog and cat food are better than dairy, but both are often too high in fat and too low in protein. It is best to leave out only a small treat, leaving them plenty of appetite for the pests in your garden.

Depending on the species, the gestation period is 40-58 days. The average litter is 3-4 newborns for larger species and 5-6 for smaller ones. Larger species of hedgehogs live 4-7 years in the wild (some have been recorded up to 16 years). Smaller species live 2-4 years (4-7 in captivity).

The most common pet species of hedgehog are hybrids of the white-bellied hedgehog or four-toed hedgehog (Atelerix albiventris) and the Algerian hedgehog (A. algirus). It is smaller than the European hedgehog, and thus is sometimes called African pygmy hedgehog. Other species kept as pets are the Egyptian long-eared hedgehog (Hemiechinus auritus auritus) and the Indian long-eared hedgehog (H. collaris). All three species prefer a warm climate (above 72°F/22°C) and do not hibernate. Attempts to hibernate are commonly fatal. They eat an insectivore diet. Commonly, this is replaced with cat food, ferret food and insects and other animals. It is illegal to own a hedgehog as a pet in some U.S. states and some Canadian municipalities, and breeding licenses are required. No such restrictions exist in Europe. 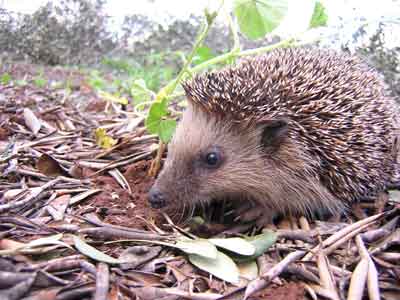 Hedgehogs are a powerful form of pest control. A single hedgehog can keep an average garden free of pests by eating up to 200 grams of insects each night. Therefore, it is common throughout England to see people attempting to lure hedgehogs into their yards with treats and hedgehog-sized holes in their fences.

One problem with using hedgehogs for garden pest control is the use of chemical insecticide. While the hedgehog is immune to most poisons, it is not immune to them when ingesting insects full of the poison. This causes many hedgehog deaths where pet hedgehogs eat contaminated bugs inside the house.

In areas where hedgehogs have been introduced, such as New Zealand and the islands of Scotland, the hedgehog itself has become a pest. In New Zealand it causes immense damage to native species including insects, snails and ground-nesting birds, particularly shore birds. As with many introduced animals, it lacks natural predators. With overpopulation, it kills off more insects than initially intended and expands its diet to include things such as snails, worms, and the eggs of wading birds. Attempts to eliminate hedgehogs from bird colonies on the Scottish islands of North Uist and Benbecula in the Outer Hebrides have met with considerable opposition.

This article is licensed under the GNU Free Documentation License. It uses material from the Wikipedia article "Hedgehog".