The unicorn is a legendary creature embodied like a horse, but slender and with a single — usually spiral — horn growing out of its forehead (whence its name—cornum being Latin for 'horn'). Though the popular image of the unicorn is that of a white horse differing only in the horn, the traditional unicorn has a billy-goat beard, a lion's tail, and cloven hoofs, which distinguish him from a horse. Interestingly, these modifications make the horned ungulate more realistic, since only cloven-hoofed animals have horns. Marianna Mayer has observed, "The unicorn is the only fabulous beast that does not seem to have been conceived out of human fears. In even the earliest references he is fierce yet good, selfless yet solitary, but always mysteriously beautiful. He could be captured only by unfair means, and his single horn was said to neutralize poison." 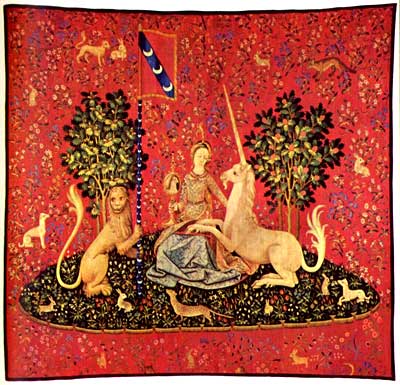 In medieval lore, the alicorn is the spiraled horn of the unicorn and is said to be able to heal and neutralize poisons. This is derived from Ctesias's reports on the unicorn in India, where it was used by the rulers of that place for anti-toxin purposes so as to avoid assassination. According to an interpretation of seals carved with an animal which resembles a bull (and which may in fact be a way of depicting bulls in profile), it has been claimed that the unicorn was a common symbol during the Indus Valley civilization, appearing on many seals. It may have symbolized a powerful group.

The unicorn does not appear in early Greek mythology, but in Greek natural history, for Greek writers on natural history were convinced of the reality of the unicorn, which they located in India, a distant and fabulous realm for them. The earliest description is from Ctesias, who described in Indica white wild asses, fleet of foot, having on the forehead a horn a cubit and a half in length, colored white, red and black; from the horn were made drinking cups which were a preventive of poisoning. Aristotle must be following Ctesias when he mentions two one-horned animals, the oryx, a kind of antelope, and the so-called "Indian ass". In Roman times Pliny the Elder's Natural History mentions the oryx and an Indian ox as one-horned beasts, as well as the Indian ass. Pliny adds that "it cannot be taken alive." Aelian, quoting Ctesias, adds that India produces also a one-horned horse, and says that the "monoceros" was sometimes called carcazonon, which may be a form of the Arabic "carcadn", meaning "rhinoceros". Strabo says that in India there were one-horned horses with stag-like heads.

Medieval knowledge of the fabulous beast stems from biblical and ancient sources, and the creature was variously represented as a kind of wild ass, goat, or horse. By A.D. 200, Tertullian had called the unicorn a small fierce kidlike animal, a symbol of Christ. The predecessor of the medieval bestiary, compiled in Late Antiquity and known as Physiologus popularized an elaborate allegory in which a unicorn, trapped by a maiden (representing the Virgin Mary) stood for the Incarnation. As soon as the unicorn sees her it lays its head on her lap and falls asleep. This became a basic emblematic tag that underlies medieval notions of the unicorn, justifying its appearance in every form of religious art. The unicorn was also found in courtly terms: for some 13th century French authors such as Thibaut of Champagne and Richard of Fournival, the lover is as attracted to his lady as the unicorn is to the virgin. This version of salvation provided an alternative to God's love and was called heretical.

With the rise of humanism, the unicorn also acquired positive secular meanings, including chaste love and faithful marriage. It plays this role in Petrarch's Triumph of Chastity. It was a heraldic motif, appearing on the national arms and coins of Scotland. The royal throne of Denmark was made of "unicorn horns" (actually narwhal tusks). The same material was used for ceremonial cups because the unicorn's horn was believed to neutralize poison.

In popular belief, unicorn horns could neutralize poisons. Therefore, people who feared poisoning sometimes drank from goblets made of "unicorn horn". Alleged aphrodisiac qualities and other purported medicinal virtues also drove up the cost of "unicorn" products such as milk, hide, and offal. Unicorns were also said to be able to determine whether or not a woman was a virgin; in some tales, they could only be mounted by virgins. 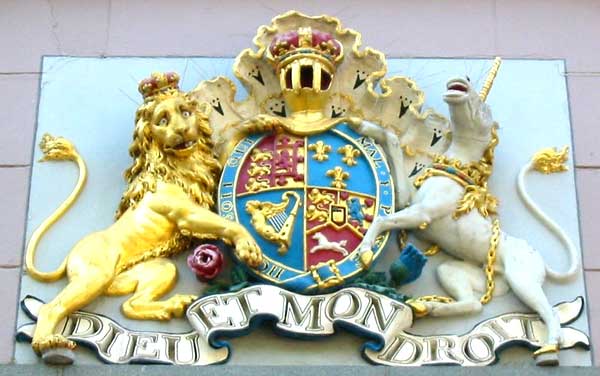 Royal coat of arms of the United Kingdom (Hanoverian, pertaining to George II)

In heraldry, a unicorn is depicted as a horse with a goat's cloven hooves and beard, a lion's tail, and a slender, spiral horn on its forehead. Whether because it was an emblem of the Incarnation or of the fearsome animal passions of raw nature, the unicorn was not widely used in early heraldry, but became popular from the fifteenth century, usually collared, an indication that its nature had been tempered.

It is probably best known from the royal arms of Scotland and the United Kingdom: two unicorns support the Scottish arms; a lion and a unicorn support the UK arms. The arms of the Society of Apothecaries in London has two golden unicorn supporters.

Baron Georges Cuvier maintained that as the unicorn was cloven-hoofed it must therefore have a cloven skull (making impossible the growth of a single horn), but this was later disproved by Dr. W. Franklin Dove, a University of Maine professor, who artificially fused the horn buds of a calf together, creating a one-horned bull.

In the domestic goat, a rare deformity of the generative tissues can cause the horns to be joined together; such an animal could be another possible inspiration for the legend. A farmer and a circus owner also produced fake unicorns, remodeling the "horn buttons" of goat kids, in such a way their horns grew deformed and joined in a grotesque seemingly single horn.

Relics ornamented with supposed unicorn horns can be found in museums in Vienna and elsewhere in central Europe. However, these horns are in fact the spiral tusks of an Arctic cetacean known as the narwhal (Monodon monoceros), as Danish zoologist Ole Worm established in 1638. Presumably they were brought to central Europe as a trade item by Vikings or other northern mariners and sold as genuine unicorn horns, passing the various tests intended to spot fake unicorn horns.

This article is licensed under the GNU Free Documentation License. It uses material from the Wikipedia article "Unicorn".