The Alps is the collective name for one of the great mountain range systems of Europe, stretching from Austria and Slovenia in the east, through Italy, Switzerland, Liechtenstein and Germany to France in the west. The word Alps means mountains. The highest mountain in the Alps is Mont Blanc at 4810 meters on the French-Italian border. 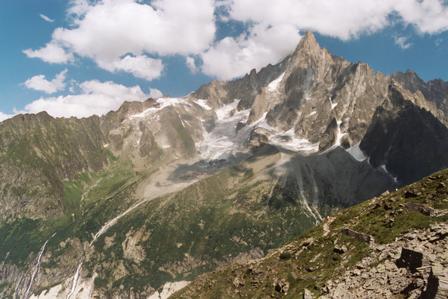 Many writers take the growth of grain as the characteristic of the mountain region; but so many varieties of all the common species are in cultivation, and these have such different climatal requirements, that they do not afford a factory criterion.

A more natural limit is afforded by the presence of the chief deciduous trees -- oak, beech, ash and sycamore maple. These do not reach exactly to the same elevation, nor are they often found growing together; but their upper limit corresponds accurately enough to the change from a temperate to a colder climate that is further proved by a change in the wild herbaceous vegetation. This limit usually lies about 1200 m above the sea on the north side of the Alps, but on the southern slopes it often rises to 1500 m, sometimes even to 1700 m.

The European Alps from space in May 2002.
From NOAA.

It must not be supposed that this region is always marked by the presence of the characteristic trees. The interference of man has in many districts almost extirpated them, and, excepting the beech forests of the Austrian Alps, a considerable wood of deciduous trees is scarcely anywhere to be found. In many districts where such woods once existed, their place has been occupied by the Scots pine and Norway spruce, which suffer less from the ravages of goats, the worst enemies of tree vegetation. The mean annual temperature of this region differs little from that of the British Islands; but the climatal conditions are widely different. Here snow usually lies for several months, till it gives place to a spring and summer considerably warmer than the average of British seasons.

This article is licensed under the GNU Free Documentation License. It uses material from the Wikipedia article "Alps".