The Chernobyl accident occurred on April 26, 1986, at the Chernobyl nuclear power plant (originally named after Vladimir Lenin) in Ukraine (then part of the Soviet Union). It is regarded as the worst accident in the history of nuclear power. Because there was no containment building, a plume of radioactive fallout drifted over parts of the western Soviet Union, Eastern Europe, Scandinavia, UK, and the eastern United States. Large areas of Ukraine, Belarus, and Russia were badly contaminated, resulting in the evacuation and resettlement of roughly 200,000 people. About 60% of the radioactive fallout landed in Belarus.

There are two conflicting official theories about the cause of the accident. The first was published in August 1986 and effectively placed the blame solely on the power plant operators. The second theory was published in 1991 and attributed the accident to flaws in the RBMK reactor design, specifically the control rods. Both commissions were heavily lobbied by different groups, including the reactor's designers, Chernobyl power plant personnel, and the government. Some independent experts now believe that neither theory is completely correct. 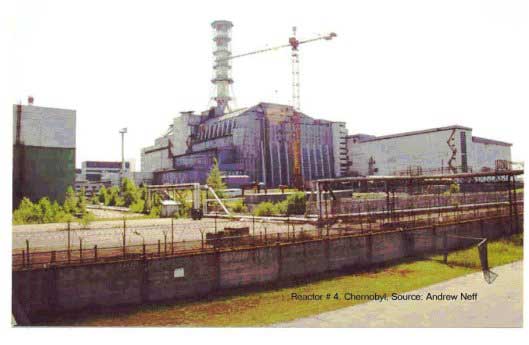 On April 25, 1986, the Unit 4 reactor was scheduled to be shut down for routine maintenance. It had been decided to use this occasion as an opportunity to test the ability of the reactor's turbine generator to generate sufficient electricity to power the reactor's safety systems (in particular, the water pumps) in the event of a loss of external electric power. At 1:23:04 A.M., the experiment began. The unstable state of the reactor was not reflected in any way on the control panel, and it does not appear that anyone in the reactor crew was fully aware of danger. Electricity to the water pumps was shut off, and as they were driven by the inertia of the turbine generator the water flow rate decreased. The turbine was disconnected from the reactor, increasing the level of steam in the reactor core. As the coolant heated, pockets of steam formed in the coolant lines. Due to the slow speed of the control rod insertion mechanism (18–20 seconds to complete), the hollow tips of the rods and the temporary displacement of coolant, the scram caused the reaction rate to increase. Increased energy output caused the deformation of control rod channels, causing the rods became stuck after being inserted only one-third of the way, and were therefore unable to stop the reaction. By 1:23:47 the reactor jumped to around 30 GW, ten times the normal operational output. The fuel rods began to melt and the steam pressure rapidly increased causing a large steam explosion, displacing and destroying the reactor lid, rupturing the coolant tubes and then blowing a hole in the roof, allowing radioactive material to escape into the atmosphere.

Radiation detectors were under-calibrated to the levels of radiation, and one of the two capable of detecting the high levels was cut off due to the explosion. This allowed the chief of reactor crew, Alexander Akimov, to assume that the reactor was intact. The evidence of pieces of graphite and reactor fuel lying around the building was ignored, and the readings of another dosimeter brought in by 4:30 A.M. local time were dismissed under the pretext that the new dosimeter must have been defective. Akimov stayed with his crew in the reactor building until morning, trying to pump water into the reactor. None of them wore any protective gear. Most of them, including Akimov himself, died from radiation exposure during the three weeks following the accident. Shortly after the accident, firefighters arrived to try to extinguish the fires. They were not told how dangerously radioactive the smoke and the debris were. The fire was extinguished by 5 A.M., but many firefighters received high doses of radiation. The government committee, formed to investigate the accident, arrived at Chernobyl in the evening of April 26. By that time two people were dead and fifty-two were hospitalized. During the night of April 26–April 27 — more than 24 hours after the explosion—the committee, faced with ample evidence of extremely high levels of radiation and a number of cases of radiation exposure, had to acknowledge the destruction of the reactor and order the evacuation of the nearby city of Pripyat. In order to reduce baggage, the residents were told that the evacuation would be temporary, lasting approximately three days. As a result, Pripyat is still complete with personal belongings that can never be moved due to radiation. The worst of the radioactive debris was collected inside what was left of the reactor. The reactor itself was covered with bags with sand, lead and boric acid thrown off helicopters (some 5,000 tons during the week following the accident). A large concrete sarcophagus was hastily erected to seal off the reactor and its contents. 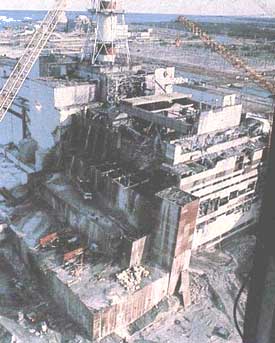 203 people were hospitalized immediately, of whom 31 died (28 of them died from acute radiation exposure). Most of these were fire and rescue workers trying to bring the accident under control, who were not fully aware of how dangerous the radiation exposure (from the smoke) was. 135,000 people were evacuated from the area, including 50,000 from the nearby town of Pripyat, Ukraine. Health officials have predicted that over the next 70 years there will be a 2% increase in cancer rates in much of the population which was exposed to the 5–12 (depending on source) EBq of radioactive contamination released from the reactor. An additional 10 individuals have already died of cancer as a result of the accident.

Contamination from the Chernobyl accident was not evenly spread across the surrounding countryside, but scattered irregularly depending on weather conditions. Reports from Soviet and Western scientists indicate that Belarus received about 60% of the contamination that fell on the former Soviet Union. But a large area in the Russian Federation south of Bryansk was also contaminated, as were parts of northwestern Ukraine.

The initial evidence in other countries that a major exhaust of radioactive material had occurred came not from Soviet sources, but from Sweden, where on April 27 workers at the Forsmark Nuclear Power Plant (approximately 1100 km from the Chernobyl site) were found to have radioactive particles on their clothes. It was Sweden's search for the source of radioactivity, after they had determined there was no leak at the Swedish plant, that led to the first hint of a serious nuclear problem in the Western Soviet Union.

Right after the accident, the main health concern involved radioactive iodine, with a half-life of eight days. Today, there is concern about contamination of the soil with strontium-90 and caesium-137, which have half-lives of about 30 years. The highest levels of caesium-137 are found in the surface layers of the soil where they are absorbed by plants, insects and mushrooms, entering the local food supply. Note that cesium is not mobile in most soils because it binds to the clay minerals. Recent tests (ca. 1997) have shown that caesium-137 levels in trees of the area are continuing to rise. There is some evidence that contamination is migrating into underground aquifers and closed bodies of water such as lakes and ponds. The main source of elimination is predicted to be natural decay of caesium-137 to stable barium-137, since runoff by rain and groundwater has been demonstrated to be negligible.

The issue of long-term effects of Chernobyl disaster on civilians is very controversial. The number of people whose lives were affected by the accident is enormous. Over 300,000 people were resettled because of the accident; millions lived and continue to live in the contaminated area. On the other hand, most of those affected received relatively low doses of radiation; there is little evidence of increased mortality, cancers or birth defects among them; and when such evidence is present, existence of a causal link to radioactive contamination is uncertain. 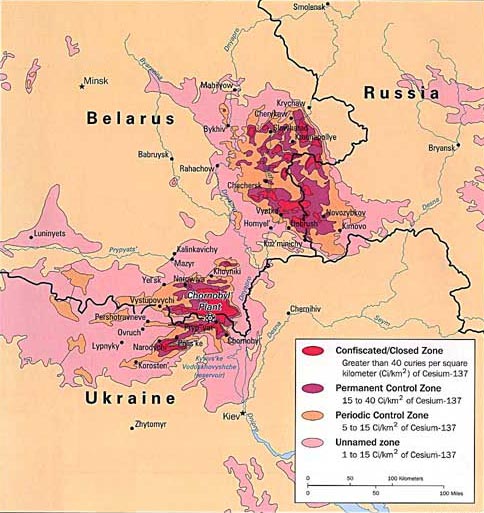 In September 2005, a report by the Chernobyl Forum, comprising a number of agencies including the International Atomic Energy Agency, the World Health Organization, UN bodies and the Governments of Belarus, the Russian Federation and Ukraine, put the total predicted number of deaths due to the accident at 4,000. This predicted death toll includes the fifty workers who died of acute radiation syndrome as a direct result of radiation from the disaster, nine children who died from thyroid cancer and an estimated 3,940 people who could die from cancer as a result of exposure to radiation. The report also stated that, apart from a 30 kilometer area around the site and a few restricted lakes and forests, radiation levels had returned to acceptable levels.

The Chernobyl accident was a unique event, on a scale by itself. It was the first time in the history of commercial nuclear electricity generation that radiation-related fatalities occurred, and was for a long time the only such incident (since then an accident at the Japanese Tokaimura nuclear fuel reprocessing plant on September 30, 1999, resulted in the radiation related death of one worker on December 22 of that same year and another on April 27, 2000).

The trouble at the Chernobyl plant itself did not end with the disaster in Reactor No. 4. The damaged reactor was sealed off and 200 meters of concrete placed between the disaster site and the operational buildings. The sarcophagus is not an effective permanent enclosure for the destroyed reactor. Its hasty construction, in many cases conducted remotely with industrial robots, means it is aging badly, and if it collapses, another cloud of radioactive dust could be released. The sarcophagus is so badly damaged that a small earth tremor or severe winds could cause the roof to collapse. A number of plans have been discussed for building a more permanent enclosure. Most of the money donated by foreign countries and contributed by Ukraine has been squandered by inefficient distribution of construction contracts and overall management, or simply stolen. Water continues to leak into the shelter, spreading radioactive materials throughout the wrecked reactor building and potentially into the surrounding groundwater. The basement of the reactor building is slowly filling with water that is contaminated with nuclear fuel and is considered high-level radioactive waste. Though repairs were undertaken to fix some of the most gaping holes that had formed in the roof, it is by no means watertight, and will only continue to deteriorate.

This article is licensed under the GNU Free Documentation License. It uses material from the Wikipedia article "Chernobyl disaster".