The Louvre Museum (Musée du Louvre) in Paris, France, is one of the largest and most famous museums in the world. The building, a former royal palace, lies in the center of Paris, between the Seine river and the Rue de Rivoli. Its central courtyard, now occupied by the Louvre glass pyramid, lies in the axis of the Champs-Élysées, and thus forms the nucleus from which the Axe historic springs. Part of the royal Palace of the Louvre was first opened to the public as a museum on November 8, 1793, during the French Revolution. 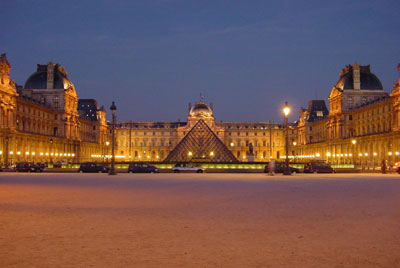 The first royal "Castle of the Louvre" on this site was founded by Philippe II in 1190, as a fortress to defend Paris on its west against Viking attacks. In the 14th century, Charles V turned it into a palace of the arts, but Francois I and Henri II tore it down to build a real palace; the foundations of the original fortress tower are now under the Salle des Cariatides (Room of the Caryatids).

The existing part of the Château du Louvre was begun in 1546. The architect Pierre Lescot introduced to Paris the new design vocabulary of the Renaissance, which had been developed in the châteaux of the Loire. His new wing for the old castle defined its status, as the first among the royal palaces. J. A. du Cerceau also worked on the Louvre.

During his reign (1589-1610), King Henri IV added the Grande Galerie. More than a quarter of a mile long and one hundred feet wide, this huge addition was built along the bank of the Seine River and at the time was the longest edifice of its kind in the world. Henri IV, a promoter of the arts, invited hundreds of artists and craftsmen to live and work on the building's lower floors. This tradition continued for another two hundred years until Napoleon ended it. Louis XIII (1610-1643) completed the Denon Wing, which had been started by Catherine Medici in 1560. Today it has been renovated, as a part of the Grand Louvre Renovation Programme. The Richelieu Wing was also built by Louis XIII. It was part of the Ministry of Economy of France, which took up most of the north wing of the palace. The Ministry was moved and the wing was renovated and turned into magnificent galleries which were inaugurated in 1993, the 200th anniversary of the Louvre Museum.

Commissioned by King Louis XIV, architect Claude Perrault's eastern wing (1665-1680), crowned by an uncompromising Italian balustrade along its distinctly non-French flat roof, was a ground-breaking departure in French architecture. His severe design was chosen over a design provided by the great Bernini, who came to Paris for the purpose. Perrault had translated the Roman architect Vitruvius into French. Now Perrault's rhythmical paired columns form a shadowed colonnade with a central pedimented triumphal arch entrance raised on a high, rather defensive basement, in a restrained classicizing baroque manner that has provided models for grand edifices in Europe and America for centuries. The Metropolitan Museum in New York, for one example, reflects Perrault's Louvre design. 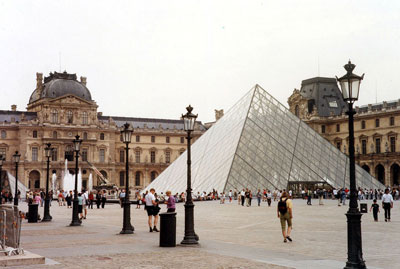 The Louvre was still being added to by Napoleon III. The new wing of 1852-1857, by architects Visconti and Hector Lefuel, represents the Second Empire's version of Neo-Baroque, restlessly charged with detail everywhere and laden with sculpture. Work continued until 1876. In 1989, the Crystal Pyramid was inaugurated. It was designed and built by Ieoh Ming Pei. It was the first renovation of the Grand Louvre Project. Today, many renovations are taking place. One of the most recent was the renovation of the Carre Gallery, where the Mona Lisa is exhibited. The Louvre holds the rich artistic heritage of the French people from the early Capetian Kings through the Empire of Napoleon Bonaparte and to the present day.

Long managed by the French state under the Réunion des Musées Nationaux the Louvre has recently acquired powers of self-management as an "Etablissement Public Autonome" in order to better manage its growth. Since September 14, 2005, the Louvre museum has gradually forbidden the taking of photos of its artworks.

Among the thousands of priceless paintings is Leonardo da Vinci's Mona Lisa, perhaps the most famous painting in the world; it is housed in the Salle des Etats in a climate-controlled environment behind protective glass. Works of artists like Fragonard, Rembrandt, Rubens, Titian, Poussin, and David can also be seen. Among the well-known sculptures in the collection are the Winged Victory of Samothrace and the Venus de Milo. The collection of Baron Edmond de Rothschild (1845-1934), given to the Louvre in 1935, fills an exhibition room. It contains more than 40,000 engravings, nearly 3,000 drawings and 500 illustrated books.

Besides art, the Louvre has many other types of exhibits, including archeology, history, and architecture. It has a large furniture collection, whose most spectacular item used to be the Bureau du Roi of the 18th century, now returned to the Palace of Versailles.

This article is licensed under the GNU Free Documentation License. It uses material from the Wikipedia article "Louvre".