Modern art is a general term, used for most of the artistic production from the late 19th century until approximately the 1970s. (Recent art production is more often called Contemporary art or Postmodern art). Modern art refers to the then new approach to art where it was no longer important to represent a subject realistically — the invention of photography had made this function of art obsolete. Instead, artists started experimenting with new ways of seeing, with fresh ideas about the nature, materials and functions of art, often moving further toward abstraction.

Modern art began as a Western movement, particularly in painting and printmaking, and then expanding to other visual arts, including sculpture and architecture in the mid-19th century. By the late 19th century, several movements which were to be influential in modern art had begun to emerge: Impressionism, centered around Paris, and Expressionism, which first emerged in Germany.

The influences were varied: from exposure to Eastern decorative arts, particularly Japanese printmaking, to the colouristic innovations of Turner and Delacroix, to a search for more depiction of common life, as found in the work of painters such as Millet. At the time, the generally held belief about art is that it should be accurate in its depiction of objects, but that it should be aimed at expressing the ideal, or the domestic. Thus the most successful painters of the day worked either through commissions, or through large public exhibitions of their own work. There were official government sponsored painters' unions, and governments regularly held public exhibitions of new fine and decorative arts. 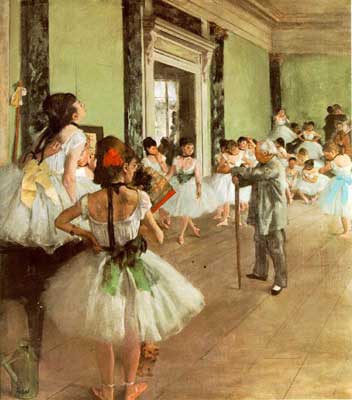 Thus, breaking with idealization and depiction were not merely artistic statements, but decisions with social and economic results.

These movements did not necessarily identify themselves as being associated with progress, or personal artistic freedom, but instead argued, in the style of the times, that they represented universal values and reality. The Impressionists argued that people do not see objects, but only the light which they reflect, and therefore painters should paint in natural light rather than in studios, and should capture the effects of light in their work.

Impressionist artists formed a group to promote their work, which, despite internal tensions, was able to mount exhibitions. The style was adopted by artists in different nations, in preference to a "national" style. These factors established the view that it was a "movement". These traits: establishment of a working method integral to the art, establishment of a movement or visible active core of support, and international adoption, would be repeated by artistic movements in the Modern period in art.

Among the movements which flowered in the first decade of the 20th century were Fauvism, Cubism, Expressionism and Futurism.

World War I brought an end to this phase, but indicated the beginning of a number of anti-art movements, such as Dada and the work of Marcel Duchamp, and of Surrealism. Also, artist groups like de Stijl and Bauhaus were seminal in the development of new ideas about the interrelation of the arts, architecture, design and art education. 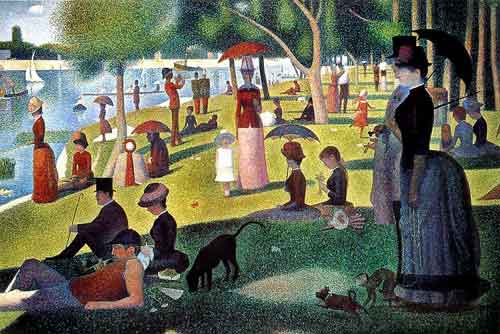 Sunday Afternoon on the Island of La Grande Jatte painted by Georges-Pierre Seurat in 1884 – 1886.

Modern art was introduced to the United States with the Armory Show in 1913, and through European artists who moved to the U.S. during World War I. It was only after World War II, though, that the U.S. became the focal point of new artistic movements. The 1950s and 1960s saw the emergence of Abstract Expressionism, Pop art, Op art and Minimal art; in the late 1960s and the 1970s, Land art, Performance art, Conceptual art and Photorealism emerged.

Around that period, a number of artists and architects started rejecting the idea of "the modern" and created typically Postmodern works.

Starting from the post-World War II period, fewer artists used painting as their primary medium; instead, larger installations and performances became widespread. Since the 1970s, new media art has become a category in itself, with a growing number of artists experimenting with technological means such as video art.

This article is licensed under the GNU Free Documentation License. It uses material from the Wikipedia article "Modern Art".