The Renaissance was an influential cultural movement which brought about a period of scientific revolution and artistic transformation, at the dawn of modern European history. It marks the transitional period between the end of the Middle Ages and the start of the Modern Age. The Renaissance is usually considered to have begun in the 14th century in Italy and the 16th century in northern Europe. It is also known as "Rinascimento" (in Italian).

Renaissance is a French word coined by French historian Jules Michelet, and expanded upon by Swiss historian Jacob Burckhardt in the 19th century, that literally means rebirth. Rebirth is used in two ways. First, it means rediscovery of ancient classical texts and learning and their applications in the arts and sciences. Second, it means that the results of these intellectual activities created a revitalization of European culture in general. Thus it is possible to speak of the Renaissance in two different but meaningful ways: A rebirth of classical learning and knowledge through the rediscovery of ancient texts, and a rebirth of European culture in general.

During the last quarter of the 20th century many scholars took the view that the Renaissance was perhaps only one of many such movements. This is in large part due to the work of historians like Charles H. Haskins (1870–1937), who made a convincing case for a "Renaissance of the 12th century," as well as by historians arguing for a "Carolingian renaissance." Both of these concepts are now widely accepted by the scholarly community at large; as a result, the present trend among historians is to discuss each so-called renaissance in more particular terms, e.g., the Italian Renaissance, the English Renaissance, etc. This terminology is particularly useful because it eliminates the need for fitting "The Renaissance" into a chronology that previously held that it was preceded by the Middle Ages and followed by the Reformation, which many believe to not be accurate. The entire period is now often replaced by the term "Early Modern".

Other periods of cultural rebirth have also been termed a "renaissance"; such as the Harlem Renaissance or the San Francisco Renaissance. The other renaissances are not considered further in this article, which will concentrate on the Renaissance as the transition from the Middle Ages to the Modern Age. Since the term was first created in the 19th century, historians have various interpretations on the Renaissance.

The predominant view is that the Renaissance of the 15th century in Italy, spreading through the rest of Europe, represented a reconnection of the west with classical antiquity, the absorption of knowledge—particularly mathematics—from Arabic, the return of experimentalism, the focus on the importance of living well in the present (e.g. humanism), an explosion of the dissemination of knowledge brought on by printing and the creation of new techniques in art, poetry and architecture which led to a radical change in the style and substance of the arts and letters. This period, in this view, represents Europe emerging from a long period as a backwater, and the rise of commerce and exploration. The Italian Renaissance is often labelled as the beginning of the "modern" epoch.

Marxist historians view the Renaissance as a pseudo-revolution with the changes in art, literature, and philosophy affecting only a tiny minority of the very wealthy and powerful while life for the great mass of the European population was unchanged from the Middle Ages. They thus deny that it is an event of much importance. 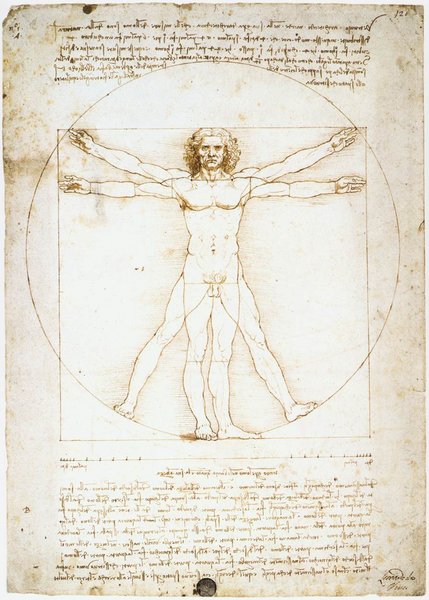 Today most historians view the Renaissance as largely an intellectual and ideological change, rather than a substantive one. Moreover, many historians now point out that most of the negative social factors popularly associated with the "medieval" period - poverty, warfare, religious and political persecution, and so forth - seem to have actually worsened during this age of Machiavelli, the Wars of Religion, the corrupt Borgia Popes, and the intensified witch-hunts of the 16th century. Many of the common people who lived during the "Renaissance" are known to have been concerned by the developments of the era rather than viewing it as the "golden age" imagined by certain 19th century authors. Perhaps the most important factor of the Renaissance is that those involved in the cultural movements in question - the artists, writers, and their patrons - believed they were living in a new era that was a clean break from the Middle Ages, even if much of the rest of the population seems to have viewed the period as an intensification of social maladies.

Johan Huizinga (1872–1945) acknowledged the existence of the Renaissance but questioned whether it was a positive change. He argued that the Renaissance was a period of decline from the high Middle Ages, which destroyed much that was important. The Latin language, for instance, had evolved greatly from the classical period and was still used in the church and by others as a living language. However, the Renaissance obsession with classical purity saw Latin revert to its classical form and its natural evolution halted. Robert S. Lopez has contended that it was a period of deep economic recession. Meanwhile George Sarton and Lynn Thorndike have both criticised how the Renaissance affected science, arguing that progress was slowed.

Petrarch (1304–1374) is another early Renaissance figure. As part of the humanist movement he concluded that the height of human accomplishment had been reached in the Roman Empire and the ages since have been a period of social rot which he labeled the Dark Ages. Petrarch saw history as social, art and literary advancement, and not as a series of set religious events. Re-birth meant the rediscovery of ancient Roman and Greek Latin heritage through ancient manuscripts and the humanist method of learning. These new ideas from the past (called the "new learning" at the time) triggered the coming advancements in art, science and other areas.

Another possible starting point is the fall of Constantinople to the Turks in 1453. It was a turning point in warfare as cannon and gunpowder became a central element. In addition, Byzantine-Greek scholars fled west to Rome bringing renewed energy and interest in the Greek and Roman heritage, and it perhaps represented the end of the old religious order in Europe.

The Italian Renaissance was intertwined with the intellectual movement known as Renaissance humanism and with the fiercely independent and combative urban societies of the city-states of northern Italy in the 13th to 16th centuries. Italy was the birthplace of the Renaissance for several reasons.

The first two or three decades of the 15th century saw the emergence of a rare cultural efflorescence, particularly in Florence. This 'Florentine enlightenment' (Holmes) was a major achievement. It was a classical, classicising culture which sought to live up to the republican ideals of Athens and Rome. Sculptors used Roman models and classical themes. This society had a new relationship with its classical past. It felt it owned it and revived it. Florentines felt akin to 1st century BC republican Rome. Rucellai wrote that he belonged to a great age; Leonardo Bruni's Panegyric to the City of Florence expresses similar sentiments. There was a genuine appreciation of the plastic arts—pagan idols and statuary—with nudity, expressions of human dignity, etc.

A similar parallel movement was also occurring in the arts in the early 15th century in Florence—an avant-garde, classicising movement. Many of the same people were involved; there was a close community of people involved in both movements. Valla said that, as they revived Latin, so was Latin architecture revived, for example Rucellai's Palazzo built by Leone Battista Alberti. Of Brunelleschi, he felt that he was the greatest architect since Roman times.

Sculpture was also revived, in many cases before the other arts. There was a very obvious naturalism about contemporary sculpture, and highly true to life figures were being sculpted. Often biblically-themed sculpture and paintings included recognizable Florentines.

This intense classicism was applied to literature and the arts. In most city-republics there was a small clique with a camaraderie and rivalry produced by a very small elite. Alberti felt that he had played a major part, as had Brunelleschi, Masaccio, etc. Even he admitted he had no explanation of why it happened.

There is plenty of evidence of preconditions for the Renaissance in Florence. In 1300, Florence had a civic culture, with people like Latini who had a sense of classical values, though different from the values of the 15th century. Villani also had a sense of the city as daughter and creature of Rome. Petrarch in the mid-14th century hated civic life but bridged the gap between the 14th and 15th centuries as he began to collect antiquities.

The 1380s saw several classicising groups, including monks and citizens. There was a gradual build-up rather than a big bang. Apart from the elites there was already an audience for the Renaissance. Florence was a very literate audience, already self-conscious and aware of its city and place in the political landscape.

Florence experienced not just one but many crises; Milan, Lucca, the Ciompi. The sense of crisis was over by 1415 and there was a new confidence, a triumphant experience of being a republic. 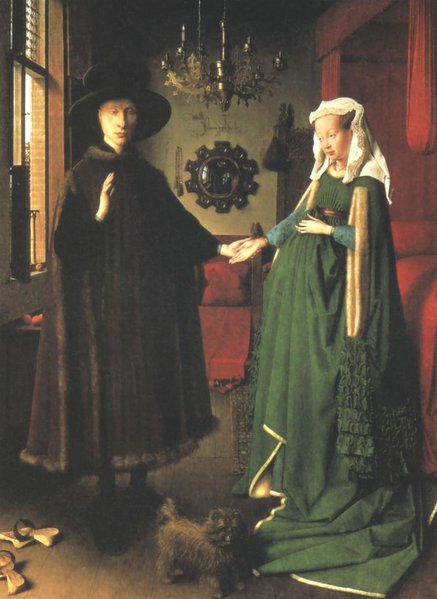 Portrait of Giovanni Arnolfini and his Wife, 1434 by Jan van Eyck.

Between 1413-1423 there was an economic boom. The upper class had the financial means to support scholarship. Gombrich says there was a sense of ratifying yourself to the ancient world, leading to a snobbishness and an elite view of education, and a tendency for the rich wanting to proclaim their ascendancy over the poor and over other cities.

The Renaissance spread north out of Italy being adapted and modified as it moved. It first arrived in France, imported by King Francis I after his invasion of Italy. Francis imported Italian art and artists, including Leonardo Da Vinci and at great expense he built ornate palaces. Writers such as Rabelais also borrowed from the spirit of the Italian Renaissance.

From France the spirit of the age spread to the Low Countries and Germany, and finally to England and Scandinavia by the late 16th century. In these areas the Renaissance became closely linked to the turmoil of the Protestant Reformation and the art and writing of the German Renaissance frequently reflected this dispute.

While Renaissance ideas were moving north from Italy, there was a simultaneous spread southward of innovation, particularly in music. The music of the 15th century Burgundian School defined the beginning of the Renaissance in that art; and the polyphony of the Netherlanders, as it moved with the musicians themselves into Italy, formed the core of what was the first true international style in music since the standardization of Gregorian Chant in the 9th century. The culmination of the Netherlandish school was in the music of the Italian composer, Palestrina. At the end of the 16th century Italy again became a center of musical innovation, with the development of the polychoral style of the Venetian School, which spread northward into Germany around 1600.

In England, the Elizabethan era marked the beginning of the English Renaissance. It saw writers such as William Shakespeare, Christopher Marlowe, John Milton, and Edmund Spenser, as well as great artists, architects (such as Inigo Jones) and composers such as Thomas Tallis, John Taverner, and William Byrd.

This article is licensed under the GNU Free Documentation License. It uses material from the Wikipedia article "The Renaissance".