The Neanderthal or Neandertal was a species of genus Homo (Homo neanderthalensis) that inhabited Europe and parts of western Asia from about 230,000 to 29,000 years ago (the Middle Palaeolithic and Lower Paleolithic, in the Pleistocene epoch).

Neanderthals were adapted to cold, as shown by their larger brains, short but robust builds and large nose. These traits are promoted by natural selection in cold climates, and are also observed in modern sub-arctic populations. Their brains were roughly 10 percent larger than those of modern humans. On average, Neanderthals stood about 1.65m tall (just under 5' 6") and were very muscular, comparable to modern weight-lifters.

Their characteristic style of stone tools is called the Mousterian Culture, after a prominent archaeological site where the tools were first found. 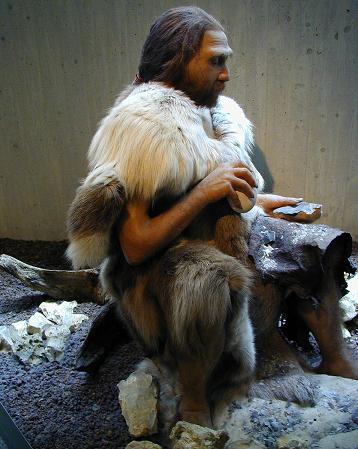 The type specimen, dubbed Neanderthal 1, consisted of a skull cap. Other material found were two femora, the three right arm bones, two of the left arm bones, part of the left ilium, and fragments of a scapula and ribs. They were originally thought to be bear remains by the workers who recovered it. The workers gave the material to amateur naturalist Johann Karl Fuhlrott. Fuhlrott turned the fossils over to anatomist Hermann Schaafhausen and in 1857 the discovery was jointly announced.

That discovery is now considered the beginning of paleoanthropology. These and other discoveries ultimately led to the idea that these remains were from ancient Europeans who had played an important role in modern human origins. Over 400 Neanderthals have been found since.

The term "Neanderthal Man" was coined in 1863 by Irish anatomist William King. Neanderthal is now spelled two ways: The spelling of the German word Thal, meaning "valley", was changed to Tal in the early 20th century, but the former spelling is retained in English and in scientific names, while the modern spelling is used in German.

Neanderthal (Middle Paleolithic) archeological sites show both a smaller and a less flexible toolkit than in the Upper Paleolithic sites, occupied by modern humans that replaced them.

There is little evidence that Neanderthals used antlers, shell, or other bone materials to make tools: their bone industry was relatively simple. However, there is good evidence that they routinely constructed a variety of stone implements. The Neanderthal (Mousterian) tool case consisted of sophisticated stone-flakes, task-specific hand axes, and spears. Many of these tools were very sharp.

Although much has been made of the Neanderthal's burial of their dead, their burials were less elaborate than those of anatomically modern humans. The interpretation of the Shandiar IV burials as including flowers, and therefore being a form of ritual burial (Ralph Solecki 1975), has been questioned (Sommer 1999). In some cases Neanderthal burials include grave goods such as bison and aurochs bones, tools, and the pigment ochre.

Neanderthals performed a sophisticated set of tasks normally associated with humans alone. For example, they constructed complex shelters, controlled fire, and skinned animals. Particularly intriguing is a hollowed-out bear femur with four holes in the diatonic scale deliberately bored into it. This flute was found in western Slovenia in 1995 near a Mousterian Era fireplace used by Neanderthals, but its significance is still a matter of dispute. See: prehistoric music.

Popular literature has tended to greatly exaggerate the ape-like gait and related characteristics of the Neanderthals. It has been determined that some of the earliest specimens found in fact suffered from severe arthritis. The Neanderthals were fully bipedal and had a slightly larger average brain capacity than a typical modern human, though it's thought the brain structure was organised differently.

In popular idiom the word Neanderthal is sometimes used as an insult, to suggest that a person combines a deficiency of intelligence and an attachment to brute force. Counterbalancing this are sympathetic literary portrayals of Neanderthals, as in the novel The Inheritors by William Golding and Jean M. Auel's Earth's Children series, or the more serious treatment by palaeontologist Björn Kurtén, in several works including Dance of the Tiger.

This article is licensed under the GNU Free Documentation License. It uses material from the Wikipedia article "Neanderthal Man".