The reindeer, known as caribou in North America, is an Arctic-dwelling deer (Rangifer tarandus).

The reindeer is distributed throughout a number of northern locales. Reindeer are found throughout Scandinavia (including Iceland); in Russian Europe in Spitsbergen and furthermore, Northern Russia including Novaya Zemlya; in Russian Asia, to the Pacific Ocean; in North America on Greenland, Canada and Alaska. In 1952, reindeer were re-introduced to Scotland, as the natural stock had become extinct in the 10th century. 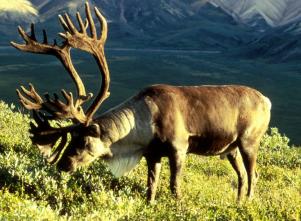 The weight of a female varies between 60 and 170 kg. In some subspecies of reindeer, the male is slightly larger; in others, the male can weigh up to 300 kg. Both sexes grow antlers, which (in the Scandinavian variety) for old males fall off in December, for young males in the spring and for females during the summer. The antlers typically have two separate groups of points (see image), a lower and upper. They mainly eat lichens in winter, especially reindeer moss. However, they also eat the leaves of willows and birches, as well as sedges and grasses. They can also eat voles (lat. clethrionomys glareolus), lemmings (lat. lemmus lemmus), birds and bird eggs. An unusual feature of the reindeer is that it has front teeth only on its bottom jaw; there are molars on both the top and bottom.

Wild caribou are still hunted in North America. In the traditional lifestyle of the Inuit people and Northern First Nations people, the caribou is a source of food, clothing, shelter and tools. 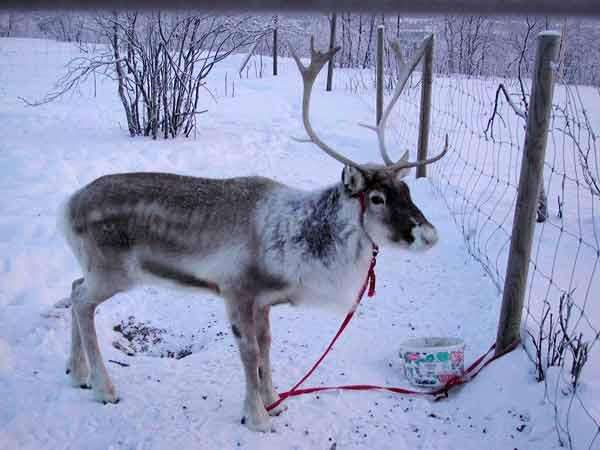 The reindeer has (or have had) an important economic role for all circumpolar peoples, including the Sami, Nenets, Khants, Evenks, Yukaghirs, Tjuktjer and Korjaker in Eurasia. It is believed that domestication started between Bronze Age-Iron Age. Siberian deer-owners also use the reindeer to ride on. (Siberian reindeer are larger than their Scandinavian relatives.) For breeders, a single deer-owner usually own some hundreds or up to thousands of animals. The numbers of Russian herders have been drastically reduced since the fall of the Soviet Union. The fur and meat is sold, which is an important source of income. Reindeer were introduced into Alaska near the end of the 19th century; they interbreed with native caribou subspecies there.

Reindeer meat is popular in the Scandinavian countries. Reindeer meatballs are sold canned.

This article is licensed under the GNU Free Documentation License. It uses material from the Wikipedia article "Reindeer".