The Grey Wolf (Canis lupus), also known colloquially as just the wolf, is a mammal of the Canidae family and the ancestor of the domestic dog. Wolves once had an almost worldwide distribution, but are now limited primarily to North America, Eurasia, and the Middle East. Their preference on habitat ranges among forests, tundra, taigas, plains and mountains. In the northern hemisphere, human encroachment on their habitat and persecution of the animals themselves have drastically reduced their range. The wolf is today frequently in the line of fire in conflicts between many different interests: tourism/industry, city/country, as well as conservation/exploitation. 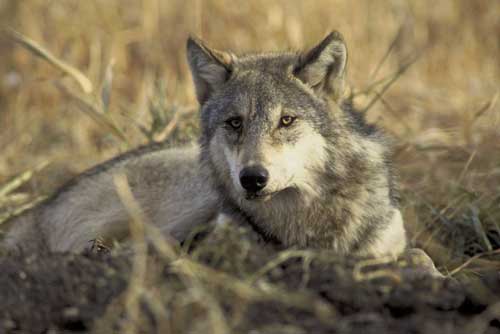 As the wolf is a top predator, the state of the wolf can frequently be seen as a state of the land where it lives. Wolves are still endangered after being hunted down in the 1600s.

Wolves weigh 23 to 60 kg (50 to 130 lb), and are about 1 to 1.5 m (40 to 60 in) long with the tail being roughly a third of their body length. The males are larger than the females. The coloration runs from grey to grey brown but can vary through the canine spectrum of white, reddish, brown and black. The coat usually lacks any clear patterns except for paintings around the eyes. In areas where the ground is snow covered white wolves are far more common. Very old wolves get a greyish tint in their coat.

The wolf anatomy differs on several points from the dog. Most obvious is a pre-caudal gland on the over side of the tail, close to the base, that is not present on dogs. The wolf usually has golden-yellow eyes, longer legs, larger paws and more pronounced jaws.

The body of the wolf is built for long distance running, with a rather thin chest and powerful back and leg muscles. Wolves can move over great distances and the wide paws make sure deep snow hampers them less than their prey.

A wolf often seems more massive than a dog of comparable weight due to the extra bulk of the coat. The coat is built up of two layers, with hard guard hairs to repel water and dirt and a thick woolly undercoat to keep it warm. The wolf changes coat two times a year, during spring and autumn. Females tend to have a thicker winter coat and keep it further into the spring than males.

Wolves live 6–9 years average in the wild, although in captivity on average they live 16 years.

Wolves function as social predators and hunt in packs organised according to a strict social hierarchy and led by an alpha male and alpha female. This social structure was originally thought to allow the wolf to take prey many times its size; new theories are emerging, however, that suggest the pack strategy instead maximizes reproductive success and has less to do with hunting.

The size of the pack may change over time and is controlled by factors including habitat type, individual personalities, and food supply. Generally packs contain between two and six animals, although packs with more than 20 have been recorded. The hierarchy or rank order of the pack is relatively strict, with the alphas (one male, one female) on top and the omega at the bottom. The hierarchy affects all activity in the pack, from which wolf eats first to which is allowed to breed (generally only the alpha pair).

While most alpha pairs are monogamous with each other, there are exceptions. An alpha animal may preferentially mate with a lower ranking animal, especially if the other alpha is closely related (a brother or sister, for example). Wolves also do not "mate for life". The death of one alpha does not affect the status of the other alpha, who will usually just take another mate.

Rank order is established and maintained through a series of ritualized fights and posturings best described as ritual bluffing. Wolves prefer psychological warfare to actual fighting and high ranking status is based more on personality or attitude than on size or strength. Rank, who holds it, and how it is enforced varies widely between packs and between individual animals. In large packs full of easygoing animals, or in a group of juvenile animals, rank order may shift almost constantly, or even be circular (animal A dominates animal B who dominates animal C who dominates animal A). 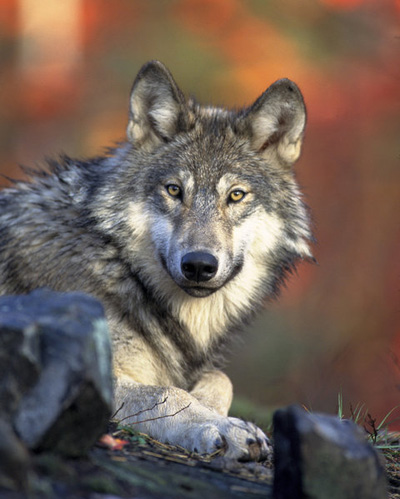 Loss of rank can happen gradually or suddenly. An older wolf may simply choose to give way when an ambitious challenger presents itself, and rank will shift without bloodshed. Or the older animal may choose to fight back, with varying degrees of intensity. While an extremely high percentage of wolf aggression is non-damaging and ritualized, a high-stakes fight can result in injury. The loser of such a damaging fight is frequently chased away from the pack, or, rarely, may be killed as other, aggressively aroused wolves attempt to join in. This kind of dominance fight is more common in the winter months, when mating occurs.

Usually, only the alpha pair are able to successfully rear a litter of pups. (Other wolves in a pack may breed, and may even produce pups, but usually they lack the freedom or the resources to raise the pups to maturity.) All the wolves in the pack assist in raising wolf pups. Some pups may choose to stay in the original pack to reinforce it and help rear more pups while others disperse.

New packs are formed when a wolf leaves its birth pack and claims a territory. Wolves searching for other wolves with which to form packs can travel very long distances in search of suitable territories. Dispersing individuals must avoid the territories of other wolves because intruders on "owned" territories are chased away or killed. This probably explains wolf "predation" of dogs. Most dogs do not have much of a chance against a wolf protecting its territory from the unwanted intrusion.

The relationship between people and wolves has had a very long, and troubled, history. Historically, humans have often viewed wolves as a great danger or as nuisance to be destroyed. An opposing view, held by most biologists and naturalists, postulates that wolves form a valuable part of the ecosystem by hunting down deer and such, and require protection. Often these views occur simultaneously and cause conflicts among differing groups of people, as one sees when a wildlife service or organization attempts to preserve vanishing wolves or to reintroduce wolves to a habitat, like the rare red wolf. 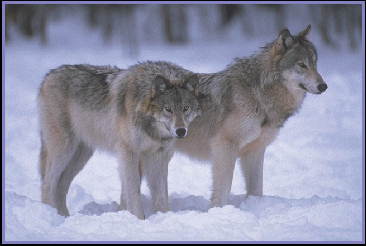 In many ancient myths, the wolf was portrayed as brave, honourable, and intelligent. The best examples of these myths can be seen in those of the Native Americans. The wolf was also the revered totem animal of ancient Rome; see Romulus and Remus and Lupercalia. In Proto-Indo-European society, the wolf was probably associated with the warrior class (see also werewolf), and the term was subject to taboo deformation, the Latin lupus being an example of a mutated form of the original Proto-Indo-European *wlkwos. Many Germanic personal names used to include "wolf" as an element (e.g. Wulfstan).

In more modern western folklore, the wolf is a creature to be feared. The iconic examples of this image are the werewolf and the Big Bad Wolf. Norse mythology includes several malevolent wolves: the giant Fenrisulfr, eldest child of Loki and the giantess Angrboda, who was feared and hated by the Aesir, and his children Skoll and Hati, who devour the sun and moon at Ragnarok.

Human fear of the wolf is responsible for most of the trouble the species has received, and the reason it was nearly hunted out of existence. However, in the 20th century, with the new knowledge of wolves and the growing respect for Native American folklore, the animal has been generally depicted much more positively.

Despite their often negative image, wolves have variously been credited, in mythology, fiction and reality, with adopting, nursing and raising human feral children, the most famous examples being Romulus and Remus and Mowgli of The Jungle Book.

This article is licensed under the GNU Free Documentation License. It uses material from the Wikipedia article "Wolves".